"Nothing Else I Need"

I've already told y'all about the most exciting part of my week!! But I actually did a few fun things...Our MOPS group had a Moms Night Out where we enjoyed yummy cheese & chocolate at The Melting Pot! And last night, a group of us celebrated Amanda's 30th birthday! We ate dinner at Taste of Texas, then ate brownies & played charades at an antique art bar. ü The brownies had peanut butter cups in them! {Yum!}

We had a thing at the church this morning where we learned about upcoming mission opportunities. At work this week, I had proofed some stuff that I printed for this morning. Apparently I should've checked some facts as well, because there were some errors. And I printed 75 copies (4 pages each, & all but one of those pages were front & back). Ya. Just keeping it real...

So my computer has some issues, and Chris has been trying to fix it for me. In the process, he set up a new profile & had me sort through my old one and only keep the stuff I need. And because my talents extend beyond bumping into things & burning myself, I accidentally deleted some pictures that I haven't printed yet :/ {Jana, you're rubbing off on me!} He also set things up to where my music is stored on the cloud instead of the computer, and I can access it through Google Play & the Melodies app. Though I don't like change so much, I think this will help my computer run faster. Plus I've been listening to songs that I haven't heard in awhile, because I don't have any of my old playlists. For example, I rediscovered today's song because I've had all of my songs on shuffle. I had completely forgotten about this song! It says lots of good stuff, but the following words are my prayer:

And because blog posts are better with pictures, I thought I'd show y'all a picture of Pepper in the entertainment center... 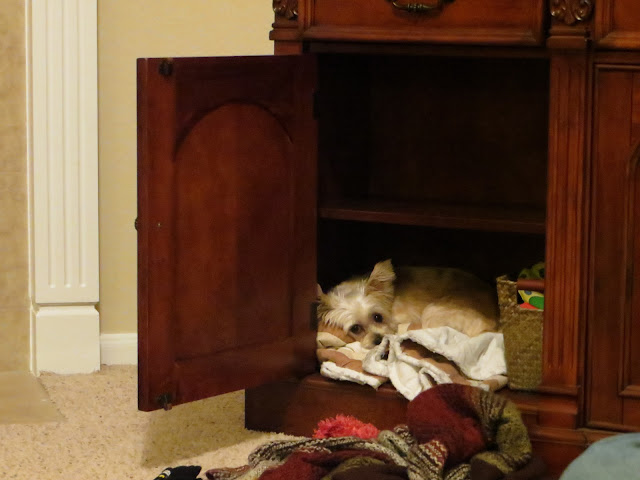 My crazy puppy has found a new place to take naps, and it makes me laugh! Recently, she started whining at that cabinet door. Her toys are stored in there, but she hadn't asked for them in a long time. I don't know if she somehow remembered, or if she walked by & smelled them. Either way, we got them out for her to play with. And for about a day, she seemed happy with them. Then she started whining at the door again, and we couldn't figure out why (because her toys were all over the floor for her to play with)! After the door was opened for her, she climbed in & lay down on the blanket in there. And she has done it several times now. She's such a weirdo!

Alrighty, I'm going to make some dinner now. I hope y'all are having a super great weekend!! ♥

Jennifer {Studio JRU} said…
You had me a cheese and chocolate. :)