My mister turns 40 today!! Because he's a bit more introverted than I am, the kids & I knew he wouldn't want a party with 75 of his closest friends. So we decided on a smaller gathering. I got ahold of Erick to find out when a good weekend would be for him to drive down here and surprise Christopher, and we made our plans from there...

Erick ended up rolling in at midnight on a Friday/Saturday a few weeks before his birthday. Chris was exhausted and had been trying to go to bed for awhile. Cody & I had stalled him with YouTube videos as long as we possibly could when we heard Erick's bike outside. I was trying to discreetly film Christopher's reaction, so please forgive the shaky video:


Ha! He was so tired and confused. It was nearly three weeks before his birthday, so it didn't really make sense that Erick would come for a surprise visit. In the middle of the night, no less! :)

The boys went to a local brewery the next day, but they didn't take any pictures. That night, five of our friends met up with us for dinner. Then we got locked in a room for an hour...

Really, we did! We played an escape game at the Houston Panic Room! We didn't escape in time, but it was super fun!! 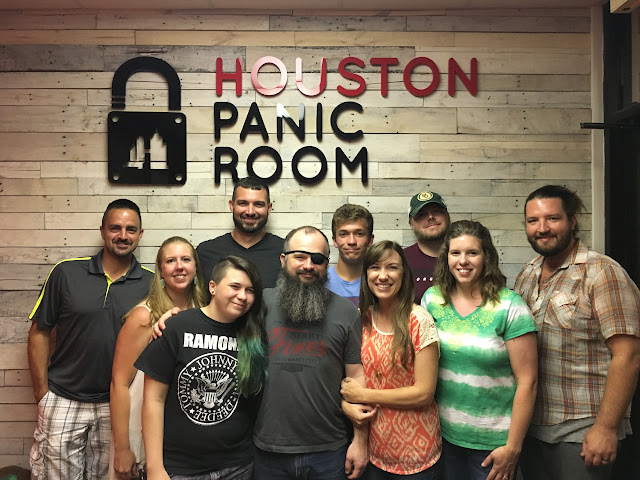 Afterward, Brian said that the night was still young, so most everyone came to our house for awhile. Elly had made mini cheesecakes a couple of nights earlier, so I didn't even have to throw a dessert together!

I have something else up my sleeve for his actual birthday. Well, his sleeve, actually...More on that later! ;)

Zion said…
That is such an anticlimactic response, but it's so Butch. Very chill. Like hi Erick thanks for coming over. I understand why he didn't freak out though. For all he knew Erick could have been there because he was going through a tough time or something. Anyway, that's great. I'm glad these introverted guys got to celebrate their way.
August 2, 2016 at 7:31 AM