This is what I'd like to call "Friends' Theme Songs: College & Career Edition". {Seeing as these friendships date back to college (or even earlier), I had to bust out the old school "Friends" song!} We did life with the people in our church's College & Career group for many, many years. Some of the people I'm talking about today had songs before I began this random series, but I decided that a few other friends needed songs, too. Of course there are many other friends that I could mention (& I probably will some time). But for now, here are just a few stories...

I've mentioned Geary's family numerous times. (His parents are the ones at the lake). His family has became my own ~ even his extended family. {In fact, the month that I had Cody, his aunts, cousins, etc. even postponed a sleepover just so I could be there!} We celebrate holidays with them, he was in our wedding, & his mom assisted me in the delivery room with both of my babies. We built our house across the street from him, & his life was literally woven together with ours. We were honored to be the only non-family members in his & Shelly's wedding. I could go on, but I'm sure you get the picture: he & his family are the closest thing you can get to family without actually being related. One area of "contention" Geary & I have with each other is when we play games. He has to win. And while I'm normally not very competitive, I totally am with him! About 13 or 14 years ago, when we were arguing over some rules in the game of Scattergories (for the record: I was right!), it was decided that in order to keep the peace, Geary & I have to be on the same team. So his song is Kaiser Chief's "Team Mate". It doesn't really relate to us except for the title, but I like the "Ah ah ahhh" part!

Then there's Shelly! Sweet PaShelly was the first person to find out that I was pregnant with my baby girl. When she {finally} married Geary & became my neighbor, it was like dream came true! We had planned on raising our children together & had envisioned the boys (Cody & Josiah) sending signals to each other in a secret code using their bedroom lights. Of course, that never happened because of the move, but I will always have sweet memories of living across the street from her! I picked "Together" for her song (specifically the section from about the 21 second mark to about 1:12) because we loved the Anne of Green Gables movies. Her song is from the soundtrack, and that part of the song is used throughout the movie. It's the melody that I hear when I think of the movie, & it's what I think of when Shelly comes to mind. I had the complete set of videos (4 of them that were about 2 hours each). Before I had my babies, we decided that we would get together on the Saturdays when Chris was working & watch one video at a time. It would take us a couple of months, but we were going to leisurely enjoy them. You can probably guess what ended up happening...the very first day, we just couldn't stop! Chris came home about half-way through the second video, and we sent him away so we could finish watching all of them! I know that all other theme songs have had words, but Shelly is a quiet person. It's fitting for her. ü

Faith's song is "The Great Adventure". We took a road trip to New Mexico for a friend's wedding one weekend, and it really was quite the adventure! {Faith, how many times did we sing this song?!} Being from Wisconsin & driving through West Texas & New Mexico, she saw things she had never seen before! Like tumbleweeds, oil derricks, White Sands & let's face it: a whole lot of nothing! I will never forget when we took the wrong road outside of Hobbs...I looked at our map (this was before smartphones & GPS) and saw the road we needed to take to get back on track. She asked how far we were from it, & I was like, "I don't know! 1/8 of an inch!" Once we turned onto it, we saw this sign: 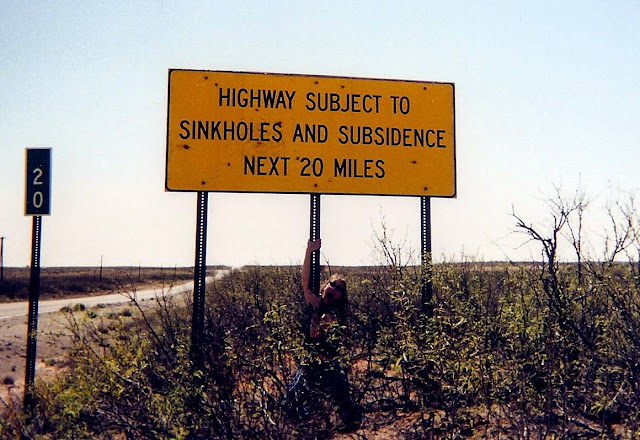 The sink hole thing was scary enough, but what in the world is subsidence?!? We kept seeing things on the side of the road & wondering if that was subsidence! Anyways, that weekend was a great adventure full of great memories!

I've known the next three guys longer than I've known Christopher...Oh, Jon. Jon Farrell. How I detest your song! I'm not sure why I dislike it so much, but I do. I think it's just the droning of the chorus. As soon as Christopher asked me if I had a song for you, I groaned, "Nooooo! I can't post that awful song!" But he insisted. How many times did you torture me by calling when it would play on the radio? In preparing this post, I dreaded just the thought of having to listen to make sure it was the right song for the player. And if you can believe this: it's not on Grooveshark! I promise!! So, what do you know? I simply can't add it to the player! And I don't feel the need to even mention what the song is called. I put "Legs" on the playlist instead ~ ha ha! How did that even start? {For those of you who are curious: I'm sure you won't even understand my extreme distaste for the song, but you can see the video here! I refuse to actually post the video on my blog!}

And now for Tony, who I have affectionately referred to as our Kramer. He used to walk into our apartment & head straight for the cookie jar, occasionally saying hello first! I'm not sure if I ever mentioned being part of a worship band, but it consisted of several of the people I'm mentioning in this post. We mostly led worship at our church, but we also traveled to Kansas, Iowa, Wisconsin, Mexico & Odessa. {I'm sure there were other places, but it has been too many years & a lot has happened since then!} Anyways, we used to take turns leading a devotional time before practice each week. One time when it was Tony's turn, he read in Genesis 22:17 where the angel of the Lord told Abraham that his descendants would outnumber the sand which is on the sea shore. We all misheard him & it sounded like he said "sandwiches on the sea shore". I have never looked at that verse the same, & I can't help but giggle when I read it! And for that reason, I've decided that when I think of Tony, I will also think of "Sandwiches Time"!

My song for Jared goes back to the aforementioned worship band. There's actually a worship song that I think of when I think of Jared, but I (once again) couldn't find it for the player. So I've settled on a song solely based on the title again. While our worship band was in Wisconsin, the A/C broke on the bus. A member of the church where we were ministering just so happened to be a mechanic, and we had him fix the bus while we were there. When we went to pick it up & head back to Texas, the mechanic said to Jared, "So, do you want to move to Wisconsin & marry my daughter?" And he did!! Therefore, I have chosen "Wisconsin" for him.

Thanks for taking this little trip down memory lane with me. If you've made it this far, you deserve a sticker! Remind me to give you one next time you see me! :)