Given the fact that we're on a really tight budget, many of the things at the top of my list aren't going to happen for awhile. That's why I felt the need to add a few things that I can actually accomplish on a limited budget! They are all things that I really want to do, but most people probably wouldn't deem them list-worthy.

However, the perfect brownie recipe is definitely list-worthy! I love boxed brownie mixes, but I don't always have them on hand. {& you know how it is when you really want a certain chocolate & can't have it!} For years now, I have wanted a simple recipe that uses supplies that I always have on hand. Every attempt I have made has failed to be all that I want it to be! They were too dry, not chewy enough, not chocolatey enough or just plain bad. I know not everyone agrees with me on this, but I really want it to taste like it came out of a box!

A couple of weeks ago, my friend Amy & I made some brownies that were supposed to be great. But they didn't turn out so well. After that experience, we were determined to bake brownies until we found the perfect recipe! We tried again one day last week, and we ended up with two different recipes that we really liked! Here's a video of my mister deciding which one he liked best:


Though it really was hard to choose between the two, I concluded that the one my mister picked was my favorite, too. The family was divided, though ~ Elizabeth & Cody liked the flavor of the other one better. So, I decided to somewhat combine the recipes. The one my mister picked had been made with unsweetened chocolate squares, while the other one had been made with Hershey's cocoa powder. So, I substituted the squares with the powder & oil, and voilà...we have a winner!

We took them over to Dan & Amanda's, and they loved them, too! 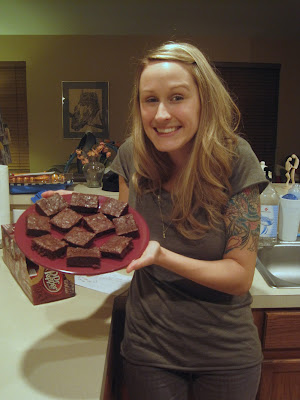 Preheat oven to 350 degrees F (180 degrees C).
Microwave butter or margarine in large bowl on HIGH for 2 minutes or until butter or margarine is melted.
Stir in chocolate & oil until mixture is creamy. Stir in sugar. Mix in eggs and vanilla. Stir in flour and nuts.
Spread in greased 13 x 9 inch pan. Bake for 35 minutes (do not overbake).

*If you want to try the first version, use 4 (1 ounce) squares unsweetened chocolate (melted with the butter or margarine) instead of the cocoa powder & oil.

{In case you wondered, today's song really does have something to do with brownies! There's also an English version, but it didn't sound so good!}

Brooke said…
i've screwed up a box mix of brownies before. i'm impressed that you pressed on through brownie recipe failures to find the perfect one.