"I Will Never See the Sun"

To those of you who live near me & know how very evident the sun is right now, today's song may seem a little odd! But, the song totally applied to our week at the lake ~ which I finally have the time to blog about! I don't know if I've explained our relationship with Dan & Sheryl before, so here's a brief history (for those of you who are new): They were very close to my mister's family when he was growing up; & when my mother-in-law passed away, Sheryl honored her request to take care of us! They consider my mister their godson, & my kids call them "Uncle Dan" & "Aunt Sheryl". We built our first house across the street from their oldest son Geary, which was only a mile down the road from Dan & Sheryl! Sheryl was in the delivery room with me when I gave birth to both of my babies, & we stayed at their house for the first few days of both of my babies' lives. The kids & I spent at least one evening a week at their house from 1998 until we moved in 2004. I consider them my in-laws, even though I'm not married to their birth son! I could go on, but I said this would be brief! Back to the main story...

Despite the lack of sun & a crazy storm that hovered over our area, we had a super great week! Geary's wife (Shelly) brought their son Josiah on Tuesday. Originally, he was only going to stay until Wednesday, but the rain changed their plans & he got to stay the entire week! He & Cody had so much fun doing boy stuff! 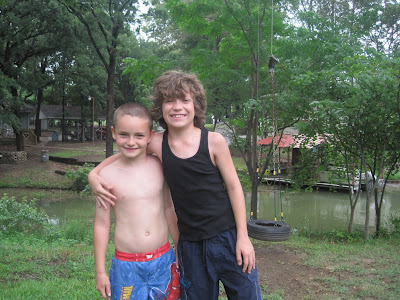 Elly did some crafts, we played Mexican Dominoes & Canasta, and we swam off the dock once. I thought it was nice to just relax, but Dan & the kids were hoping to take the boat out. Finally on Thursday, there was a brief lull in the storm! 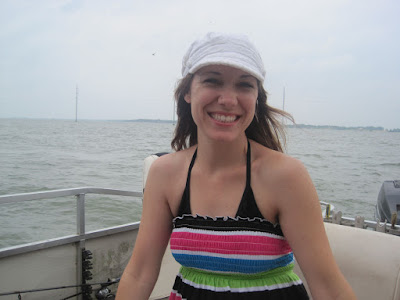 We took the boat to a spot under the bridge near their cove & went swimming. Daphne (the puppy) wasn't too fond of the water! 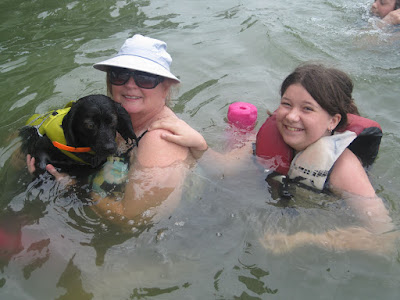 Anticipating the next round of rain showers, we didn't get the tube or anything. 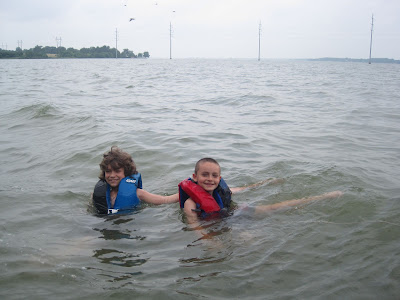 After swimming for awhile, we enjoyed a picnic lunch on the boat! Daphne got a little lunch meat & licked the crumbs off Elly's face! 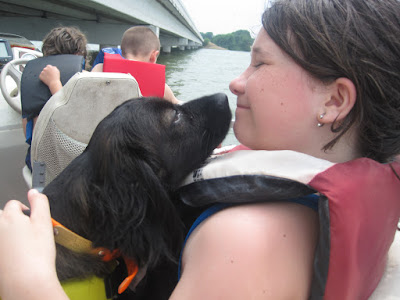 We thought we heard some thunder in the distance, so we decided we should head in but the boat wouldn't start! Fortunately, they had a solar charger. We didn't hear any more thunder, so the kids swam for a little while longer, & apparently there was just enough sun to do the job! The boys both took a turn at the wheel, & we made it back to the dock shortly before another torrential downpour! {Can you tell how dark the clouds were getting?!} 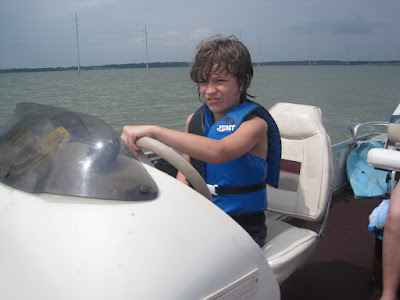 Friday was finally a sunny day, so the boys stayed in their swim trunks until it was time to go! We had to leave mid-afternoon to take Josiah home on our way to pick up Cody's tux. Am I crazy that I got all teary-eyed as I looked at our old house across the street? The kids & I took a drive through the neighborhood, going by the elementary school & the house where their dad used to live with his family before Mama Beth passed away. It was such a good time, as always! I'm so thankful for friends that have become family!