I know, right? TWO MIS-series posts ~ TWO days in a row! What's even better about having another story today is the fact that I won an award where it's appropriate to tell it! Brooke gave me this: 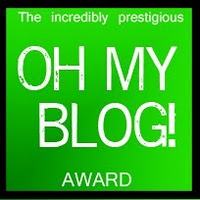 & here’s what I get to do:
Rebecca
Meredith
Cole
OK, now for the fun part! Because y'all are pretty smart, you probably already figured out that I would pick #2, huh? Well, the misspeak I'm about to tell ranks very near the top of the list of my most embarrassing moments. Ever. But, before I get started, please let me reiterate that I never intend to insult anyone with my words!

Around 11 years ago, I used to go walking with a neighbor of mine & our baby girls. Let's call her Neighbor. I didn't get to know her real well, but I knew that she had an older son who didn't live with her. We discovered that we got married on the exact same day, and before long we realized that we had a mutual friend from her high school days. We'll call him Friend. As time went by, Neighbor & I no longer walked together. There was no problem between us or anything. Life just happens & things change.

Years later, Friend's mother passed away. After her funeral, my mister & I were sitting around the dinner table with Friend. Two of Friend's high school buddies (a guy we'll call Buddy & Buddy's brother, whom we'll call Brother) were there, too. They were reminiscing about high school days, when Friend refers to me & says, "Hey, Buddy, Amy knows Neighbor!" I confirmed that & said, "Ya, we used to walk together..." Blah blah blah.

Then, Brother wriggles his eyebrows & says, "Well, Buddy used to date Neighbor!" & Friend chimes in saying, "Ya, they were together throughout high school."

So, naturally, I said, "Oh! Are you her son's father?!" {'cuz it's perfectly normal to accuse someone of fathering an illegitimate child!}

You seriously could have heard a pin drop! As soon as the words came out of my mouth, I realized what I had done & was quite shocked! My mouth dropped to the floor, and I looked at Chris for help! There really wasn't anything that he (or anyone else) could do to salvage the situation, but I was sure wishing for an "Undo" button at that moment! There was no way to explain to them that (in my mind) I had made a connection! I remembered Neighbor talking about her son who was being raised by his grandmother. I estimated him to have been the right age to have been born while she was in high school. If she was dating Buddy back then, it was quite logical that the boy could be his. You just don't ASK that type of thing!

After several moments of incredibly awkward silence, Brother says, "Well? Are you?" By the look on Friend's face, he was wondering, too. Buddy sat there with a blank stare. Then, my mister stepped in to save the day by changing the subject!

An hour or so later (after Buddy & Brother were gone), I went in search of Friend. I apologized for accusing Buddy of fathering a child out of wedlock & all. Then, Friend replied with a mischievous smile, "Well, he didn't deny it, did he?"

Have you ever blurted something out, then wished you could crawl into a hole & just hide out for awhile? Be sure to check out the other girls' blogs! Maybe they'll give you a chuckle or two!

Cole Franke said…
Thank you so much! This is such a fun award. I'm definitely going to play along. Just have to think about what to do. hmmm I really like all the options so we'll see. Billie Jean is my favorite MJ song by the way. :)
May 13, 2010 at 9:57 AM

Brooke said…
wow. that's bad. and of course no way buddy could know that you're not a nosy, prying b-word.