This week went by fast! The kids only had school two days, so I had the chance to sleep in on three different days! Unfortunately, I was only able to sleep past 7:30 once ~ & that was because I didn't get home from a crop until 1 am {& with the help of my super cute sleep mask!} I've spent a lot of this week furniture shopping, and I can't wait to tell y'all about my new stuff! You'll probably have to wait until after the new year, though. I will say that I'm typing this post while sitting in the cutest swivel glider on the planet! :) You may end up seeing pics of the stuff here & there, but I'm not completely finished yet. Plus I want to show you the whole thing without Christmas decorations. Speaking of...we put our decorations up today! We usually do it on the Friday after Thanksgiving, but we ended up furniture shopping longer than expected. Cody went to a friend's anyways, so today worked out best. The kids really enjoy putting their ornaments on the tree. {which includes the one they pick each year that is sorta their "theme", & the various ones they've made through the years} They also have certain colors of the globe ornaments that they're responsible for. Then I get to do the rest. I don't go terribly overboard, but I like to do the living room & stairs. Due to the furniture I'll tell you about later, we had to put the tree in a different spot this year. I'm afraid it's in the way of the dining area, but we really didn't know what else to do with it! I won't bore you with pictures that would look basically the same as prior years, but here's the tree in its new spot: 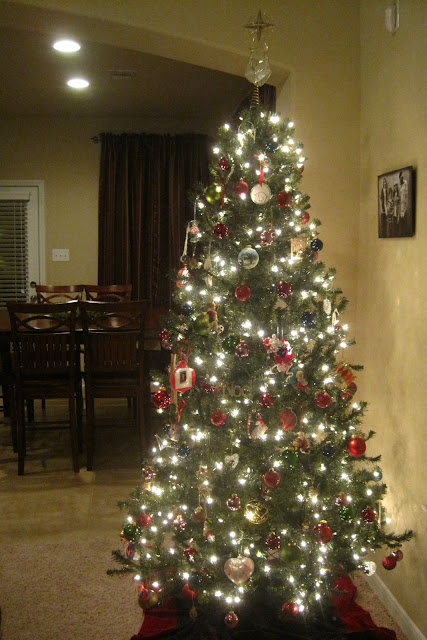 On to other things...I had lunch with my friend Sam this week! I got to meet her newest little man, and she had her four-year-old with her, too. He is absolutely adorable, and I got to sit next to him. He calls me "Miss Annie", even though Sam always tells him that my name is Amy. ü Funny story...years ago, Hayes somehow got beans in my hair when we had met up at Chipotle. So we joke about it at least every other time we get together. This time, Sam had told Hayes about it before we got to the restaurant. When we first met up, he said, "Miss Annie, I'm good now. I won't get beans in your hair this time." =) Toward the end of the meal, I told him that he did good & kept his promise to not get beans in my hair. He responded with, "Good thing this place doesn't have beans!"

I bragged on Cody last week, and now I get to brag on Elly! After each six weeks, her school holds an awards assembly/pep rally-type thing. They give out awards for all sorts of things, and it seems to keep the majority of the kids motivated to behave well & do well in their classes. One of the awards is the the "Principal's Award", where teachers pick one girl & one guy from each of the three teams in each grade. My baby girl won it this time!! She'll get to have lunch with the principals sometime this six weeks, which she thinks is pretty cool! She also received an award for Most Outstanding in ELA {because she's awesome} & A/B honor roll. I'm sorry if it seems like I'm bragging on my kids a lot. I really am so proud of them, though, so I can't help it! ♥

We spent Thanksgiving day at my brother's house! {When we first got there, a little incident occurred that reminded me of a MIS-series story I'll have to tell you about soon!} We enjoyed our time with Dad, Wendy's parents & grandparents, and her sister's family. Mom & G came by after their lunch at Tiffany's. Random story...my Jimi Hendrix water bottle had been missing for awhile, and it turns out that I had left it in my dad's car. He returned it to me last weekend & mentioned it while we were at my brother's. I told him that I was glad to have it back, because Jimi is my favorite one. Wendy said, "You name your water bottles?" & I explained that only two of them have names (Jimi & Madge ~ though my friend Aaron has now named one of my travel mugs). My mom didn't realizing that we were talking about reusable water bottles & said, "When I'm done, I usually thrown mine away! I don't have them long enough to name them." :D

And finally, today's song! One that starts out, "Jesus, there is nothing better to do than to be with You for an hour or two" has to be super! Don't you think? Love.