goingLOCAL was amazing! I'm sad that it's over, so writing this post is bittersweet for me. I really don't even know where to start...I just don't know how to put into words what I feel inside.

I guess you could say that I fell in love over the course of three days.

And not just with one little person, but with an entire neighborhood. I know that sounds crazy, especially since I didn't actually meet everyone in the neighborhood. But at the very least, I fell in love with everyone that I met! Ü

I'd love to post all of the pictures that I took, but I don't know the rules about posting children's pictures without permission. So I'm only posting pics of the kids I have permission to post, along with some pics where I blurred out their faces & stuff. I left their smiles where I could, because those smiles are part of what caused me to fall in love! 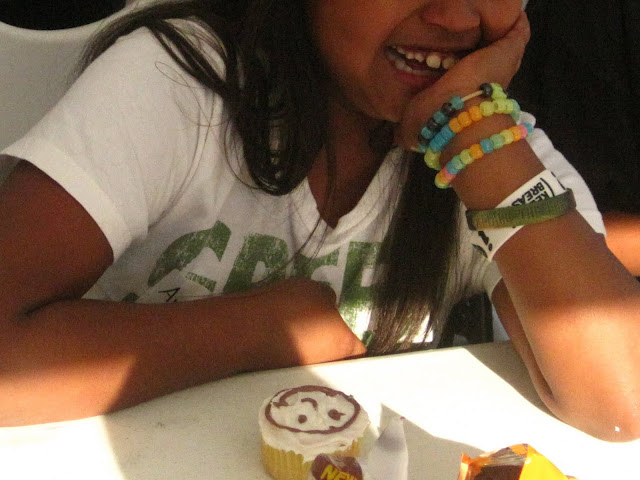 I had some great conversations with some adults and a bunch of kids. I received hugs that melted my heart. The Food Outreach fed 80-100 people each day. A first-grader read me the entire first page of the book of John from one of the Bibles that we handed out. {OK, so I sort of accidentally made her do it. It's a long story. But she enjoyed it & told me that she read more the next day!} And have I mentioned the smiles? Seriously, they'd make your heart do somersaults! 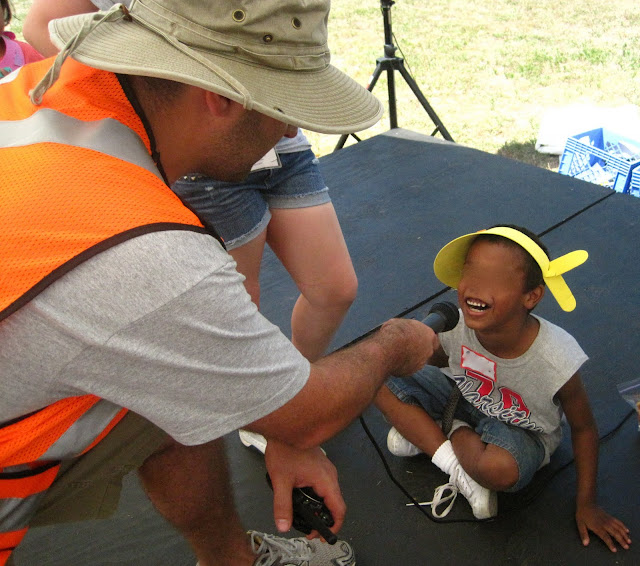 I loved seeing the kids laugh & have fun! 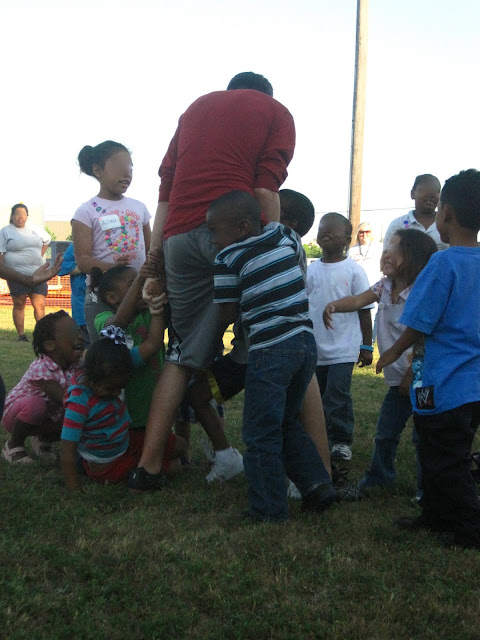 I watched tough little boys [who thought they could pick up a Marine ~ ha ha!]... 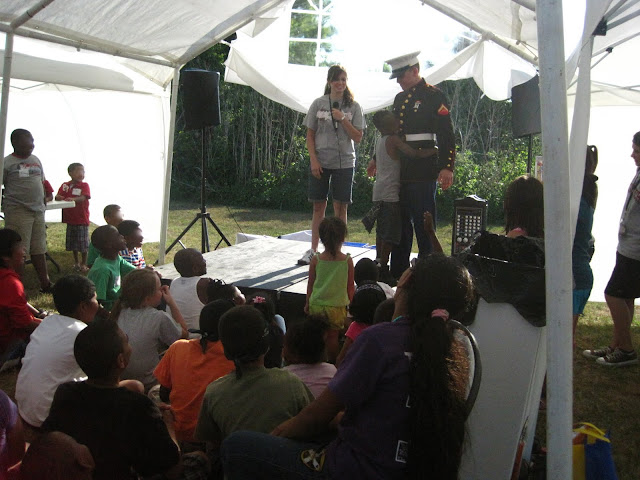 ...forget their problems for awhile & dance to the songs we played for VBS. 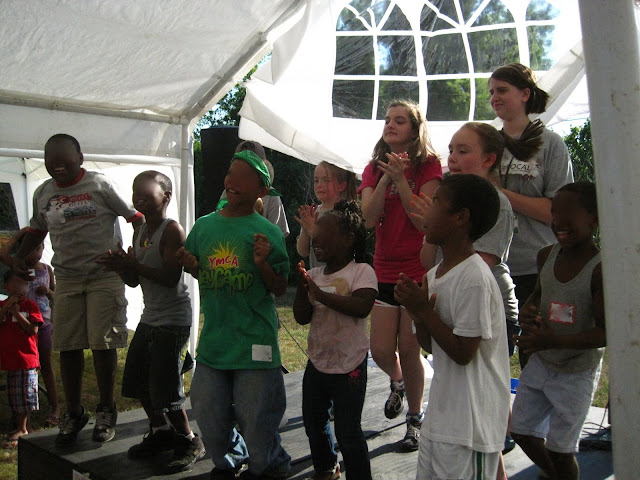 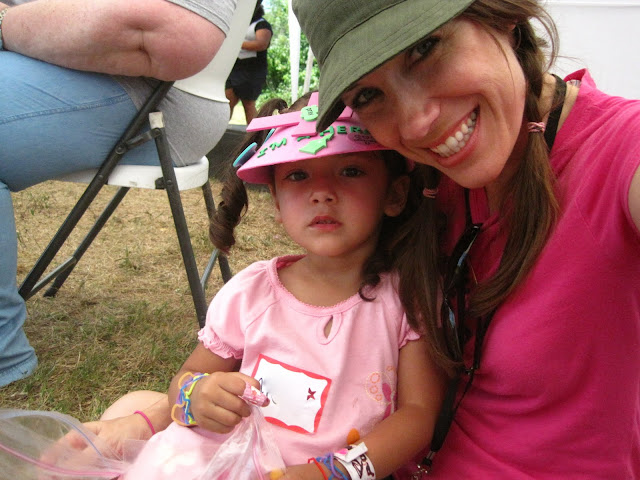 And that's only what happend on my side of the street. On Sunday morning in the youth room, I got to hear the testimonies of 5 or 6 of our teenagers who ministered to other teenagers (across the street from where I was helping with VBS). Several said that their lives have been changed. They have a greater appreciation for the things they have, and they now see a difference between wants & needs. I almost cried as one student talked about seeing a boy with huge holes in his socks, while he has a bunch of socks at home without holes. 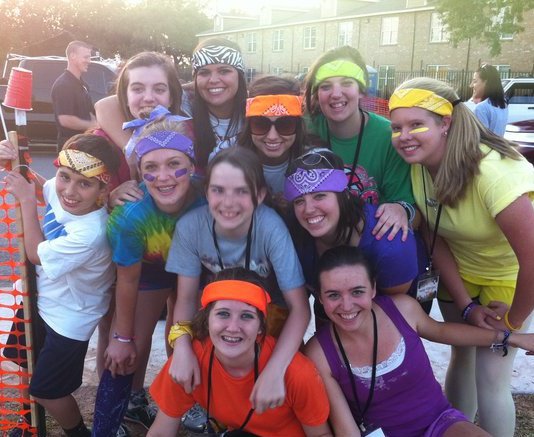 {Thanks for the pic, Amelia!}

There was also an awesome group of people that walked all over the neighborhood talking to people about Jesus. And I think I mentioned before that there were a couple of other mission projects going on in other parts of town (at the nursing home & the prison). I do life with a wonderful community of believers at my church, and I am so thankful to serve there. Over 100 people took time out of their lives to love God & love others in our community last week, and I'm so glad that I was a part of it. We got dirty, stinky, exhausted & sunburnt, but it was totally worth it! 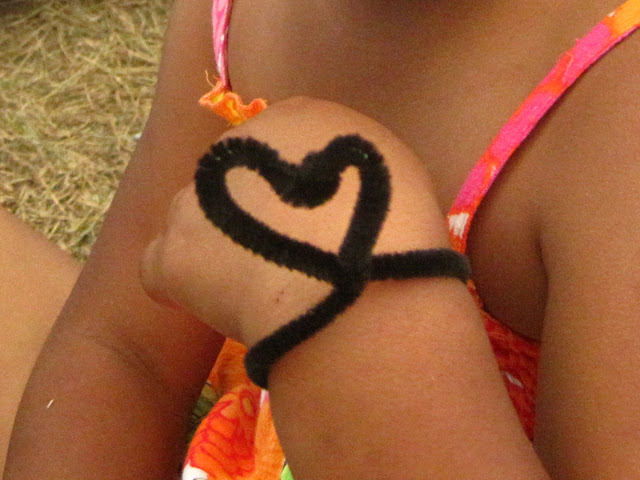 Zion said…
YEA! I am so glad everything went well. I wasn't sure what going local was so I anxiously checked your blog today knowing that this was coming.
May 10, 2011 at 6:06 PM