I'm not even going to try to make excuses because I'm beginning to sound like a broken record. I would like for you to know that I've composed most of my 2015 recap post, though, if that helps at all! To be honest, there hasn't been a whole lot of exciting stuff, but my highlights of the past couple of weeks are...

...I had a really nice visit with Clyde, Nicole, and their two beautiful daughters! Again, I failed to take a picture of their newest addition. I was too busy enjoying her and her family, and it didn't cross my mind until I got home and was telling my family about how she wrapped her tiny little hand around my finger. Seriously, her hands are so tiny!

...Indian food. That may not seem like a highlight to you, but it was a solace on a sad day. There is not an India trip on the calendar at the moment, though there was originally a trip planned for last week. And on the day that we should've arrived in India, I made Indian food for dinner. It was good, but definitely not as good as being there. 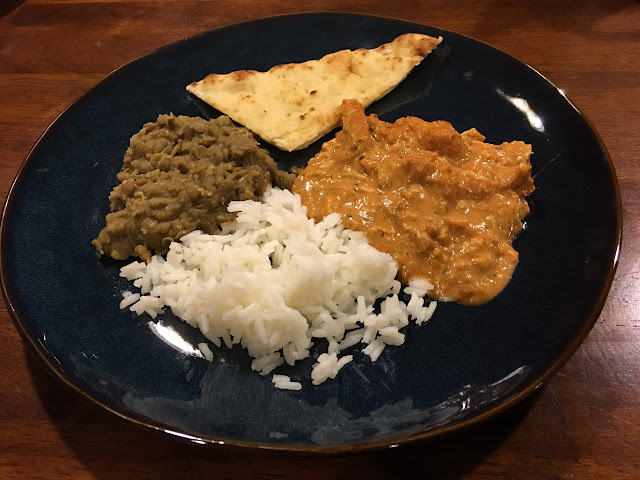 ...I did Timehop's Facehop thingy, and I thought it was fun!


...I ran into my old youth pastor at our youth associate Matt's wedding!! John was the youth pastor in the small town where I went to high school. He moved on after my freshman year, but his wife Becky's grandfather still lived in town, so we saw them occasionally. After high school, though, I didn't see them until my baby girl's first grade year, when I saw Becky and discovered that Elly was in the same class as their youngest son! I only managed to see John once, on the day that they moved to a different neighborhood, so this really was the first time I had the opportunity to catch up with him in a very long time. It was so neat! 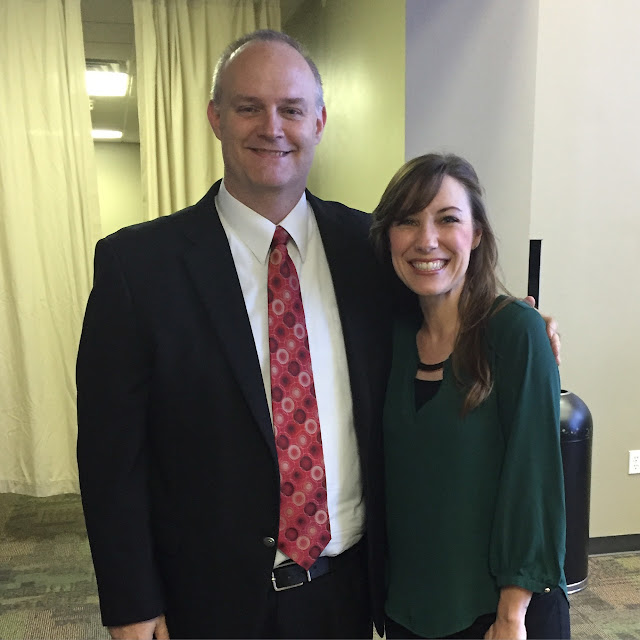 ...Kristin was a huge help for Matt & Molly's wedding! She hosted for me on Friday night and went early to let everyone in the building so I could be part of Cody's birthday party. And since Christopher almost ended up in the ER {long story, not cancer-related, and he's fine now!} it was a relief to know that she could've handled it all if I had needed her to. She stayed for the whole day, and we made sure everything was ready to go for Sunday services. It was great to have her there to share the load, plus it was nice to have her there to hang out with! 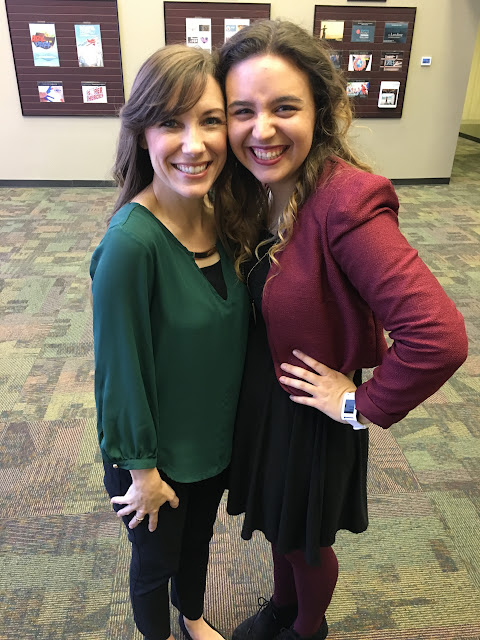 ...My sweet boy turned 15 and got his learner's permit! 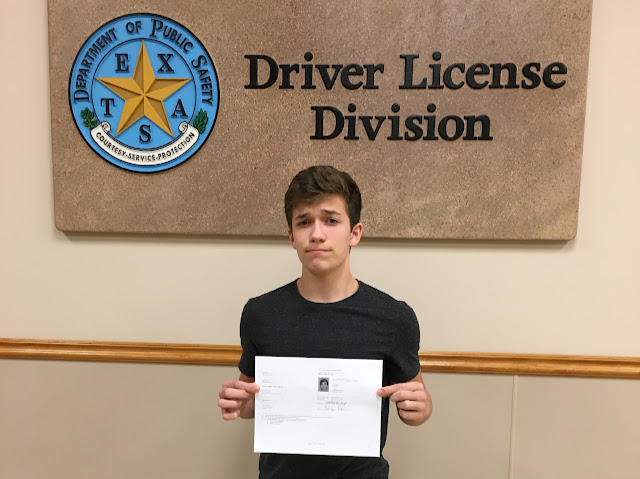 ...You have probably already heard about this, but SAEED ABEDINI WAS RELEASED FROM PRISON!!!!! Praise God!! In case you don't know who that is, I briefly wrote about him before, but you could also just Google him. Start typing his name, and he'll pop up after only the first three letters.

...My friend Desiree's mom turned 90, and I got to attend her surprise party on Saturday! Yia Yia is a hilarious little woman who is a delight to know.


...I forgot to tell y'all that Aaron is no longer our youth pastor. He is focusing on finishing up school, and his last day at work was on the last day of the year. In all honesty it was a good day for that since I had the distraction of New Year's Eve festivities. It was sad to see him go, though, and I cried the whole way home. I had known for only a month or two, and like with Lance, I had basically chosen not to think about it until I absolutely had to. It probably isn't the healthiest way to deal with things, because then I totally lost it on the last day (with both of them). But that's apparently how I roll. I had called his office to ask him something before heading out, and he asked if I was about to leave. After hanging up, I sat there thinking that I should probably go say goodbye to him. But I wanted to just chicken out and leave without saying goodbye, because I didn't want him to see me cry. Because, of course, I was already crying. Then, what do you know...he showed up at my desk. It was actually our first time to talk about him leaving, because we had both been keeping our distance from each other for the month or so prior. Again, maybe that wasn't the healthiest way to deal with things, but that's how we did it. Sigh. Have I mentioned that I don't like change? And I don't like goodbyes either...

Anyways, as for today's song, you probably weren't expecting that. I should've warned you, but the title of the song should have clued you in to the fact that there could be something unexpected. And I suppose the video was more of a clue, unless you didn't quite realize what was going on. Anyways, Neil played that song for me at work one day last week. He realized in hindsight that he probably shouldn't have, as Marcie told me later. He told his family on the evening of day that he played it for me, and Marcie and Madison were both in disbelief that he would do that to me! Maybe I shouldn't say this, but it's not the first time he told me about a song that made me cry. He knows that I appreciate good music, though, and it's true. I just think that he forgets about the fact that my husband has cancer and could die. I have enjoyed listening to Jamie Lawson over the past week or so, despite the sadness in today's song!

Speaking of stupid cancer, we have finally decided to look for a new medical oncologist. Scans were scheduled for this coming Tuesday, but insurance denied them (surprise, surprise). Dr L was fine with that and ordered a chest x-ray instead. We aren't fine with that and have put up with his lack of OM knowledge long enough. The next medical oncologist may not want to do scans at this point, either. But as stated before, if an expert who knows OM (and knows Christopher's OM) advises against having them this frequently, we'd be more likely to trust his advice. The latest recommendations from the expert who knows Christopher's situation still stands, and we'd like a doctor who is more willing to fight for us. I'm not sure how well the search will go, but I'll keep y'all posted!

And because I don't want to end on that note, here's a picture of a cute girl with a cute puppy! 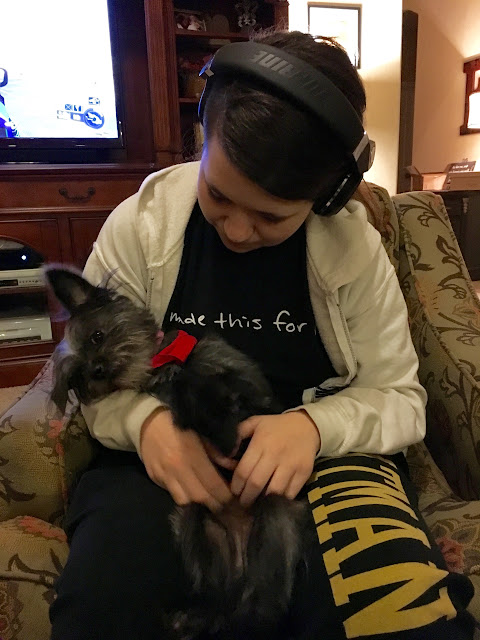 I'm hoping to catch up on your blog posts soon!! Hope y'all have a super great week!! ♥

Zion said…
Yia Yia? What a name! About the Oncologist Girl, you fight and gripe and push until you get the right Doctor. That is absolutely ridiculous. This isn't something to take lightly! I am sorry you've had to deal with these inadequacies. I'll be praying.
January 27, 2016 at 3:27 PM

Diwakar said…
Hello AMY. So blessed and feel privileged and honored to get connected with you and know you and your family because of who you are in the Lord Jesus Christ. I am a Pastor from Mumbai, India and love to get connected with the people of God around the world to be encouraged, strengthen and praying for one another. I will be praying for Chris. While going through your blog post I came to know that you were supposed to come to india but did not come through. I am anxious to know which part of India you were planning to visit. I have been in the Pastoral ministry for last 36 yrs in this great city of Mumbai a city with a great contrast where richest of rich and the poorest of poor with the love of Christ to bring healing to the broken hearted. We also encourage young and the adults from the west to come to Mumbai to work with us during their vacation time. We would love to have young people from your church who have interest in missions to come to MUMBAI to work with us during their vacation time. When you plan to come next time we will be so glad to have you come with Chris or children to work with us and also encourage women in our church. I am sure you will have a life changing experience. My email id is: dhwankhede(at)gmail(dot)com and my name is Diwakar Wankhede. Looking forward to hear from you very soon. God's richest blessings on you, your family and friends and also a blessed and a Christ centered NEW YEAR.
January 31, 2016 at 9:15 PM