"How Can I Keep from Singing"

I finally have a chance to sit down and tell y'all about CURE OM's Eyes on a Cure, the ocular melanoma patient & caregiver conference this past weekend. 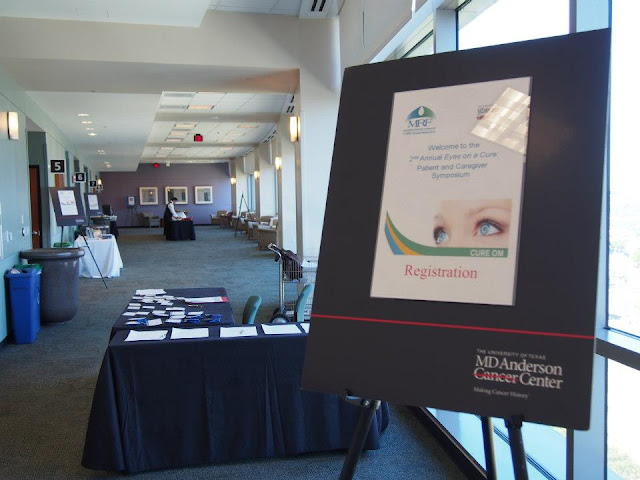 It began with a Meet & Greet on Friday night, where it was super great to finally meet so many people that have been a part of my online OM community for many years. Afterward, we went to dinner with the planning committee (of which Mister Christopher was a part): 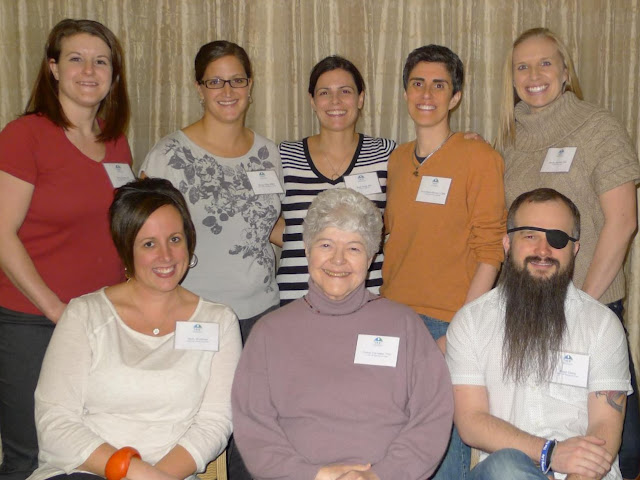 The only member missing from the picture was Rob, who hadn't yet arrived from England when the photo was taken. He made it in time for dinner, though, and I thoroughly enjoyed getting to know him over the weekend! For Christopher's benefit (I'll let you guess why), I took a picture of the two of them together: 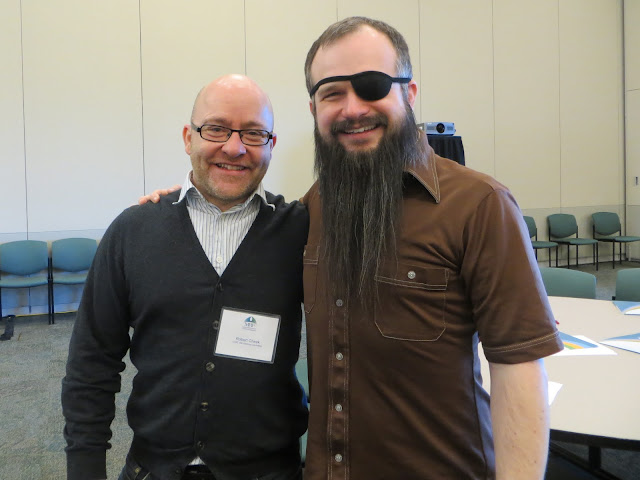 We spent a good portion of Saturday with former Louisiana Governor Kathleen Blanco and her husband Coach. She & Chris both spoke at an Ocular Melanoma Foundation conference last year, so he had already met her. But I had really looked forward to meeting her, because she knows my friend Amy's in-laws! ü She's pictured below with Tim Turnham, Executive Director of the Melanoma Research Foundation: 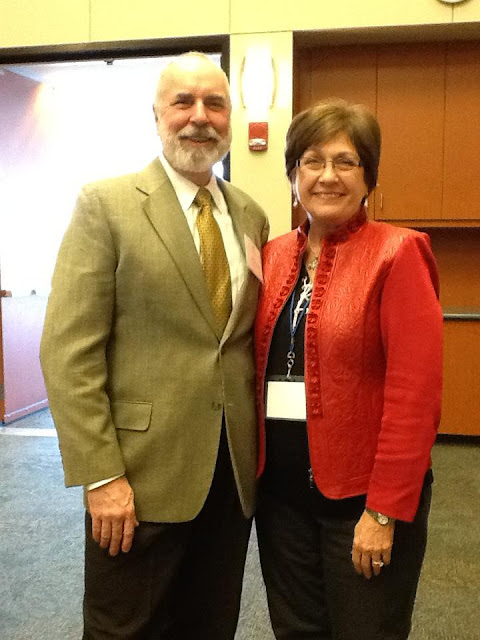 We were given a lot of information over the weekend. Though the doctors and researchers did a terrific job of trying to explain things in layman's terms, there were still several things I didn't quite understand. For instance: 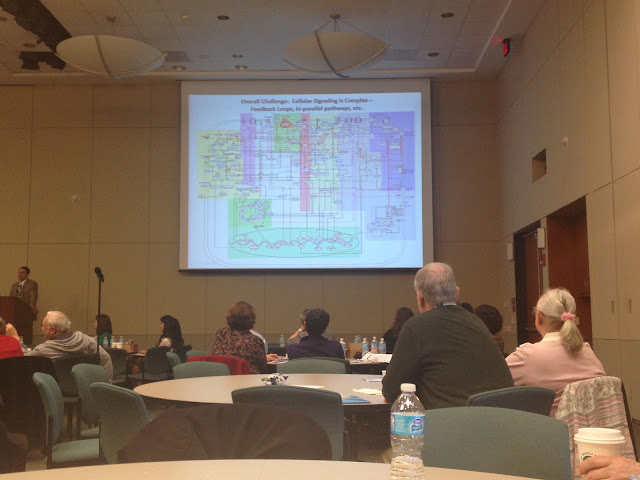 We also had a couple of peer-to-peer sessions, where we were separated into small groups based on whether we were patients (with/without metastatic disease), spouses, or those who had lost loved ones to ocular melanoma. Chris spoke on a Survivor's Panel, along with two other people. One of them is a legend in the OM community: she was diagnosed with OM almost 33 years ago and has survived over 10 years with metastatic disease!

The best part of the weekend for me was finally meeting so many people who have been a part of my online OM community! 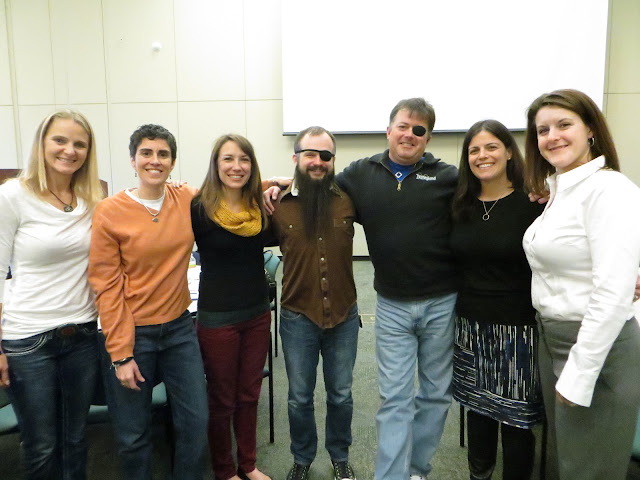 Out of the entire group, I was most excited to meet Sara: 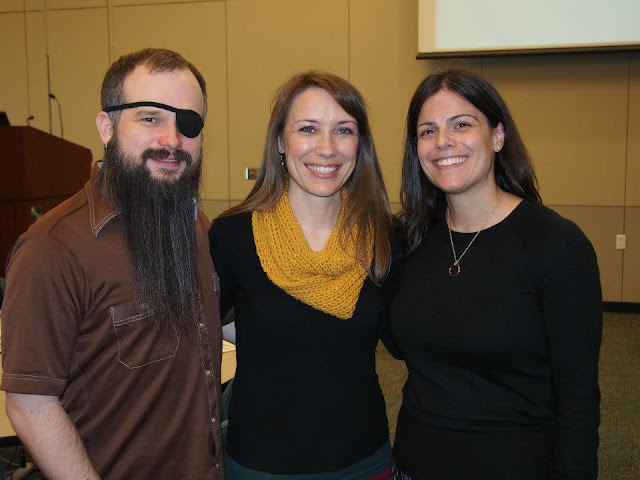 Not only is she the Co-Founder and Director of CURE OM, but Sara was the first person in the OM world who I communicated with after Christopher's diagnosis. We have stayed in touch all of these years, and I grieved with her when her husband Gregg lost his battle last year. She continues to be an advocate for those of us who are still in the battle, and I am so thankful for her.

In addition to the people who I have communicated with online, there were a lot of new faces as well. Not that any of y'all will be surprised about this next little fact, but I met a man & his wife who are practically neighbors of mine! They live in the neighborhood right next to me, and he is at Kroger as often as I am! ;)

One of the funnier parts of the weekend was when a lady went up to Chris after dinner and said, "Will you be our pirate?" She wanted a picture taken of her & her sister in their pirate shirts with a pirate standing between them! There were only two people with eyepatches, and Chris was definitely more pirate-like! ü 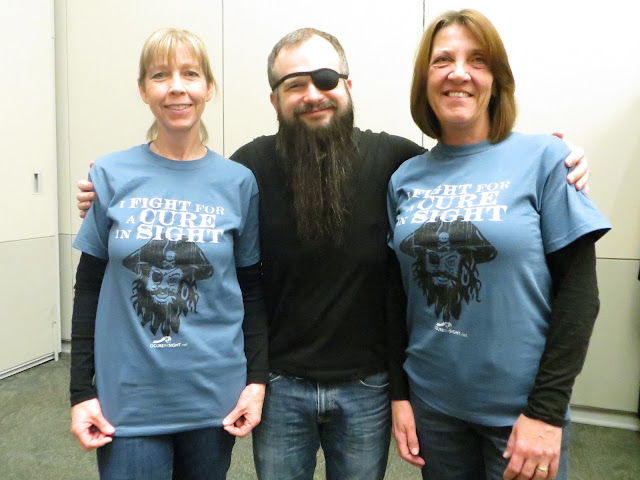 Unfortunately, we didn't think to take a picture of all of the attendees until many of them had already left. This picture that I got off facebook (along with a few others in this post) shows you an idea of how many people were there: 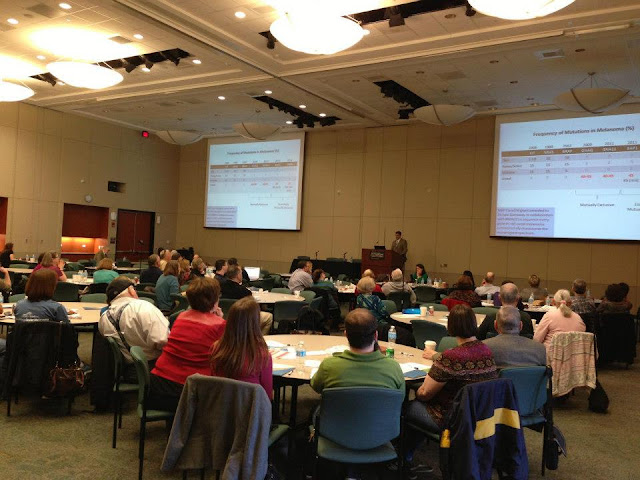 But this is all we managed to get as the conference wrapped up on Sunday afternoon: 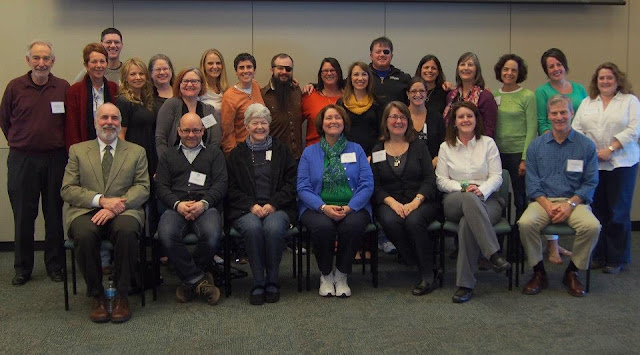 As I'm sure I've said before, I'd rather not be on this particular journey. But since this is a part of my life, I'm so glad to share it with an amazingly supportive group of people!

Throughout the weekend, there was a theme of hope...

...hope regarding the latest research advances and what they mean for the future of OM (& cancer, in general)

...hope because we are not alone in this fight

...hope that through the collaboration of many experts in the field: 1) there will soon be a standard surveillance agenda (that will prove to our insurance company that they should continue covering routine scans every six months for the rest of Christopher's life), and 2) every newly diagnosed OM patient will be offered a biopsy (that will give them a better idea of their genetic mutations and what their future holds)

...hope in the One who keeps me singing. Tim closed out his presentation with some of the lyrics from an old hymn that I was able to find for today's song {which I think is pretty hopeful!}

Zion said…
That is so awesome that you got to be a part of this. I almost cried just reading about you grieving with Sara :(
I admit Chris sticks out a little in this group, but somebodies got to represent the cool crowd ;)
March 6, 2013 at 5:57 PM

Jennifer {Studio JRU} said…
what a wonderful conference, amy! to have a group come together with a theme of hope is awesome! love the 'pirate' photo! ;)
March 6, 2013 at 8:14 PM

Jen Price said…
Sounds like it was such a good time. So great that you can have a great supportive group in this journey.
March 7, 2013 at 12:08 PM