We began a bit of a new adventure for my baby girl this week: treatment for scoliosis. This is something I had somewhat anticipated, but I had hoped we wouldn't have to deal with it. I think I've only mentioned my scoliosis a couple of times, but I don't guess I've given you much background. So in keeping with my randomness lately, I'll tell you all about it in a little:

It all began at least a generation back, but I'd venture to say that it began even further back than that. {I just don't have any records to prove it!} Both of my dad's older siblings have severe and debilitating scoliosis, which causes me to believe that there was an inherited tendency toward it. They're both in their 70's, and their spine deformities have both become even more pronounced due to osteoporosis. And when I see what they have to go through, I thank God for the ability to improve my future and my children's. But I'm getting ahead of myself a little bit...

My journey with scoliosis began when I was in elementary school, though I wouldn't realize it for about 20 years! I started having migraines that we now know were related to scoliosis. At that point, the scoliosis was probably mild enough that it wasn't really noticeable just by looking at me. This is nothing that my family ever looked into, and I wasn't running around without clothes at that age! But the best educated guess from two doctors, a physical therapist, and my chiropractor is that I had some degree of curvature by age 9. And based on genetics (including my kids' experiences), it probably began by age 6 or 7, if not sooner.

As with a lot of scoliosis cases, it progressed during the growth spurts that took place during puberty. I noticed my deformity for the first time when I was 15. {I will never forget the day, because it turned out the be the day that Stephanie died. Am I the only one that has a strange memory like that??} Anyways, that particular morning, I was at my friend Stacey's house. I had slept over there the night before, and we were getting dressed in the morning. She had changed in the restroom, & I got dressed in her room. Due to my issues with ED, I never looked at myself without clothes on. But Stacey had a full length mirror in her room, and I happened to dress in front of it that day. And I happened to notice that one side of my body had more curves than the other. I remember thinking that I could hold babies on the side that actually had a hip, as opposed to the side that was straight! ;)

For whatever reason, I never mentioned this to a doctor, and it was never detected during my annual physicals for athletics. The Adams test [that most doctors perform for those types of physicals] only detects a hump when the person bends forward. My curve is sideways, so it sorta straightens out when I bend forward. So since I didn't really know anything about scoliosis, & the doctor never saw it, I never suspected it. I did notice that I always had one pant leg longer than the other, and I blamed it on my one curvy side. At some point, I started wearing boy jeans. With a lower waist, I didn't have to deal with the bigger hip/shorter pant leg situation. And I was one happy girl when they started making lower rise jeans for girls!

Anyways...fast forward about 10 years, and I was pregnant with my baby boy. My back hurt very early on in my pregnancy, and it hurt in a different way than it had during my pregnancy with Elizabeth. I frequently complained about it to my doctor, and he would just pat my back sympathetically & say that it was part of being pregnant. After I had Cody, the pain didn't go away. I kept attributing the pain to having recently been pregnant until one day I realized that it had been over two years since I had given birth, & it hadn't gotten any better! By that point, it had affected my sciatic nerve so badly that it was difficult to go to sleep. It took forever to get comfortable enough to even relax my back when I would lie down. I could only roll over on my right side (and that act required many deep breaths & psyching myself into just doing it & getting it over with). If I was sitting and wanted to cross my left leg over my right, I would literally have to pick it up & put it on top of the other one (to avoid pain).

So I finally went to the doctor about it when I was 27 years old. I described my pain to him, and he took an x-ray. When he came back into the exam room, he had the most confused look on his face and said, "Well, you know you have scoliosis, right?"

It was like a light bulb went off in my head, and I said, "No, but that explains a lot!"

Apparently, joint laxity is more pronounced in subsequent pregnancies. So that, combined with the scoliosis, proved to be a little too much for this little body of mine. {& it probably didn't help that I had 52 pounds to lose after having Cody...!} The doctor sent me to physical therapy, and I was amazed at how quickly I started feeling better! There are a lot of great stretches that ease the pain, and core strength is essential to improving lower back pain.

A little over 5 years ago, I started going to a chiropractor. Some people don't believe in chiropractic care, but Kevin has changed my life. And I'm not exaggerating! Originally, I took Elizabeth to see him because she was experiencing a little back pain. While there, I saw a pamphlet on migraine relief through chiropractic care. At that point, I was having frequent migraines, and I'd had one for 7 of the previous 10 days. I didn't want to take a migraine prevention pill every day, especially when they tend to have some crazy side effects. So I figured it wouldn't hurt to try the chiropractor route. In the first couple of months, my migraines decreased to one a month {Stupid hormones! I schedule my adjustments right before Aunt Flow visits, which at least prevents me from having migraines during her entire visit. But I still tend to get one before or after. Sorry if that's tmi!} When Chris was first diagnosed with cancer (about a year after I started seeing Kevin), my migraines increased because of the stress. But they have mostly tapered back to the one or two days a month now, which is much better than the 4 to 20 days a month that they occurred for most of my life prior to chiropractic care!

Due to my scoliosis & family history, I went ahead and had both of my kids x-rayed. Cody was only 6 at the time and already had 11 degrees of curvature. After a year of treatments (starting at three times a week & tapering down to once a month), his spine was completely straight & has remained straight as we continue to go once a month. My curve improved slightly for awhile (from 35 to 32 degrees), but it has progressed to 39 degrees over the last couple of years. I'm not sure how much of that relates to my lack of exercise and stretching, but I know it affects my pain level. {And I've had more pain lately, so I know I need to be more disciplined with that!} As for my girl, we've been watching her back during this stage of life, getting x-rays every couple of years, & hoping that it would remain straight. Alas, it was not meant to be. Stupid scoliosis genes! Her x-rays last week showed 12 degrees of curvature, so she began her thrice-weekly adjustments on Monday. Kevin anticipates a one degree improvement per month, which is how it worked with Cody.

I sorta wish I was brave enough to show you a picture of my back, but there's no way! Whether I'm brave or not is irrelevant, because I wouldn't expose that much of myself for the world to see. But I will show you this x-ray of my back, which I guess technically exposes even more of myself: 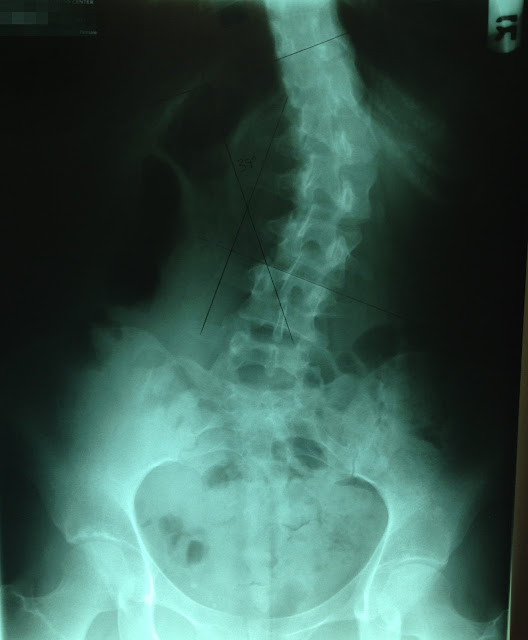 My brother asked if I was standing up straight, so I thought I'd clarify (just in case you wondered): YES, I am standing up straight. Kinda crazy, huh? I know it could be so much worse, though. And I'm so thankful for the ability to get my kids treated so they'll never know the pain that they're avoiding!