This song has absolutely nothing to do with today. It just happens to be the "test song" that my Grooveshark technical support girl picked when she showed me a way around the bug that has prevented me from making my little player widget. As you can see, it's working now! So, in honor of me being able to post my songs again, I picked her song for today. I've gone back & fixed the ones that had issues, too. Because I'm productive like that.

Anyways, I thought I'd play a little game of catch-up today...

A grass fire threatened our neighborhood last week. They shut the highway down for 4 hours (it actually crossed the highway in three places). Fortunately, no homes or buildings were burned and nobody was injured. I was aware of the fire, but I thought it was farter north. I started smelling smoke when I was watering the lawn in the morning. My friend Amy called to tell me that her husband was right by my house when they were shutting down the highway, so he wanted her to let me know about it. I was definitely a little concerned about it, but I'm glad I didn't realized just how close it was to my house until it was over! I could actually smell smoke in my house, but I couldn't actually see the fire. From upstairs, I could see smoke. I would go up there every once in awhile to see what direction the smoke was blowing. The wind was absolutely crazy that day. Anyways, you can't see my house in the picture below, but it's only about 4 or 5 houses to the right. Craziness! 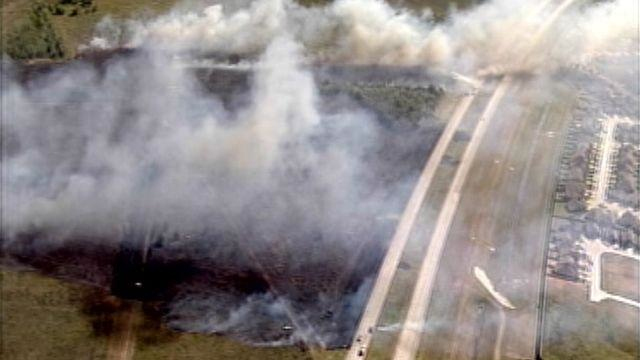 As I mentioned before, I was scrapbooking at Jana's parents over the weekend. As usual, we had a great time & ate delicious food! Elizabeth is now officially 10 years old in her album. I didn't attend as many crops this year as I normally would, so my goal of actually getting caught up this year is not going to happen. One day it will, I just know it. My total count for the weekend:
For the past few years, we've been going over to Amy's to enjoy Halloween with her family & our pastor's family. We eat yummy food, then the moms take the kids trick-or-treating while the dads stay at the house to hand out candy. Jana & I were running a little late on Sunday, so my family went over to Amy's ahead of me. When I arrived (about 30 minutes after the rest of them), I walked in to what I thought was a comical sight: our pastor was sewing Cody's costume! I SO wish I had taken a picture of that!! Here's a picture of my kids, though! 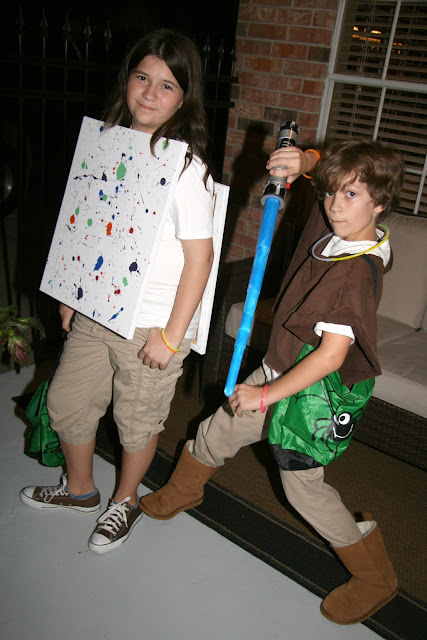 I haven't had the chance to share an exciting thing that actually happened the weekend of the wedding (like, 10 days ago or something)...I'm sure you remember the post where I expressed my desire for there to be more awareness for Ocular Melanoma. Well, I said something in passing that I decided to act on. I contacted the mateys at International Talk Like A Pirate Day, and got a couple of responses! Jezebel (the "webwench") said that they are all for connecting the day with good causes & explained how I can get something listed on their site for the event next year. I thought that would be all & was fine with that. Then, I heard from Cap'n Slappy himself! He sent me an email saying that he posted the OMF link on the Facebook International Talk Like a Pirate Day page - which has nearly 35,000 followers! As you can see from the pic below, a lot of people "liked" it. There were also several comments, some of them stating that they had shared the link. 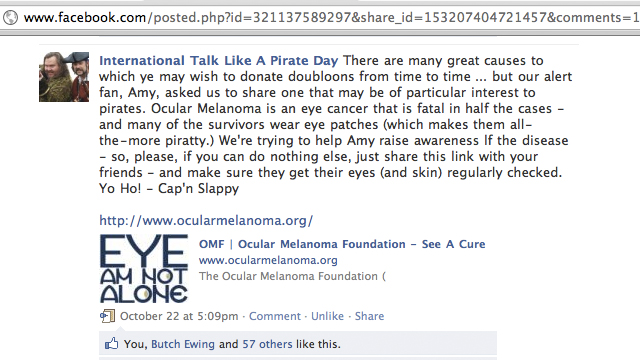 My friend Laura has also looked into ways to raise awareness & funding for OM. One of the things she found out is that Goodsearch supports OMF! So, if you'd like, you can add their toolbar to your web browser. By doing that, each time you search the internet or shop at one of their participating stores, a donation is made to OMF. Cool beans!

I guess that's all for now! I'm sorry this post was all over the place, but that's just the way I roll sometimes!

RR Mama said…
You were about 30 mins. from me!! Wish we could have met up if only for coffee or something. Oh well next time. That's something else we have in common, I like to scrapbook too! But sadly I am about 4yrs behind. But I do have everything in order, just need to find time.
November 3, 2010 at 9:08 AM

Brooke said…
very aweseme!! its amazing what one person can get done thanks to social networking!!
November 3, 2010 at 8:01 PM