Today's song was listened to the most ~ after I excluded all of the kids' Radio Disney songs! I really like Jimmy Needham, and this song has such a great message! Don't you think?!

I realized that with my MIS-series & Beautiful/NEDA week, I feel like I haven't really mentioned anything going on in my life presently! So, I thought I'd take some time today to give a little update on things...

I realize this isn't really recent, but we had our good friends Jeremiah & Jessica over for the Super Bowl. I took some cute pictures of their kids {of course, their kids are too cute, so it's pretty much impossible to take a non-cute picture of them!} 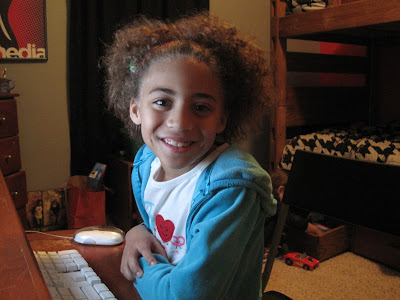 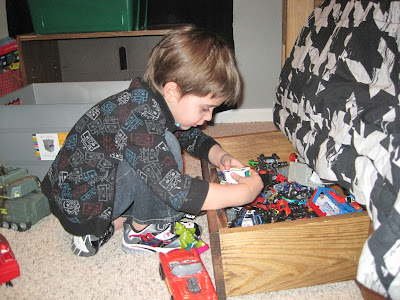 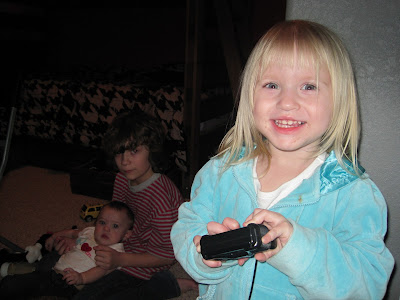 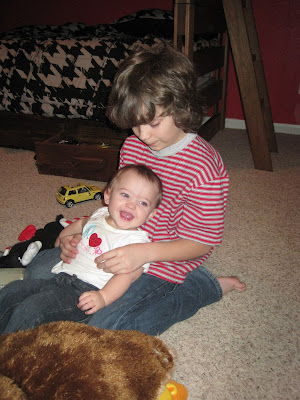 I mentioned before that I went on a scrapbook retreat! It was really super, as usual! Not only we do get a lot of scrapbooking done, but we get totally spoiled while we're there. Jana's parents welcome us into their home, just like we're their own daughters. They cook wonderful food for us, so I usually gain some weight while I'm there! I also get very little sleep, because we completely lose track of time! [On Friday night, we thought it was about midnight, when it was actually closer to 3:00 am!] My total count for the weekend:
Last weekend, my step-dad threw a 50's party at Cheeburger Cheeburger to celebrate my Mom's 60th birthday! Most of Mom & G's kids made it ~ which makes for a pretty big party! Mom has two kids, and G has seven. After adding in the spouses, kids, & a couple of other guests, I think G said there were 31 people there! 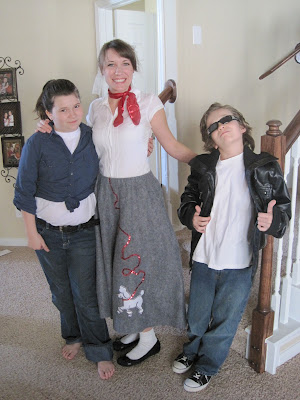 Pepper got kicked out of the groomer's this week! OK, well maybe "kicked out" is a little strong, but that's how it felt! This was only her second time at the new place near our house. The first time, she only got upset with them when they trimmed her tail area. This time, she resisted being taken back with the groomer, who then tried to pick her up! After Pepper tried to bite her, the groomer kept reaching for her (which only caused Pepper to continue to try to bite). Then, she was handed her over to another groomer that was able to stroke Pepper's back a little, but then Pepper got annoyed & tried to bite her, too! If the first lady had never tried to pick her up, I really think she would have been fine. I told them that she has never been that way at the groomer, & they suggested that I take her back to the old location! Apparently some dogs just like what they are familiar with. So, I scheduled her for an appointment at her old place, & she did fine. That groomer seemed to understand dogs a little better. She waited to take Pepper back until I was gone & Pepper couldn't see me anymore. I thought that was a brilliant idea! Here's my puppy with her new hair cut: 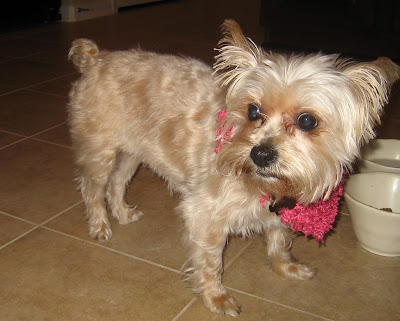 As for my mister, he is still unable to see well out of the affected eye. He only has some peripheral vision, but can't see what he is looking at directly. He had another eye appointment on Wednesday. Dr C (the retina specialist/vitrectomy surgeon) sent him for a couple of sets of pictures (with & without dye) and detected a white spot in the center of his field of vision. As I explained before, the white spots indicate lack of circulation; and if he is unable to regain circulation, he will not regain vision in those areas. Dr C told him about a couple of options & the side effects of both. He opted for the steroid shot, with the risk of glaucoma & cataracts. Now that he has a triple threat for cataracts (radiation, virectomy & steroids), I figure we'll be dealing with that sooner rather than later. Dr C said that within a few weeks Chris should be able to tell whether he will regain his vision. His eye looks as bad as it did after surgery, but he isn't in any pain.