"Picture in a Frame"

Once again it's long time no bloggy...same ol' same ol'. I'm just at this place where I don't want to give this little spot up, but I don't have the time to do any more with it than this right now. Maybe I'll have more time in the summer??

Anyways, let's get to the highlights of the last couple of weeks. I'll start with things I didn't take pictures of...

...I went to my first of at least a half dozen graduation parties this season!

...We got to witness Aaron's ordination. It was such a special night where Aaron acknowledged God's call on his life, several people attested to his character and call, the elders prayed over him, and the rest of us had the opportunity to pray for him and Kloe' as well. It was such a sweet thing to experience.

...I babysat sweet Evie Kate earlier this week! She is at such a fun age right now (about 16 months). She still likes to snuggle some, but she likes to play, too! And she's still absolutely adorable! :)

We had a Fellas' & Ladies' Night with the students one Friday night. The boys took over part of the main building and ate junk food while playing video games [lame]. And the girls took over the Warehouse and ate better food while doing way more fun stuff! First, my friend Becca instructed us in painting these masterpieces... 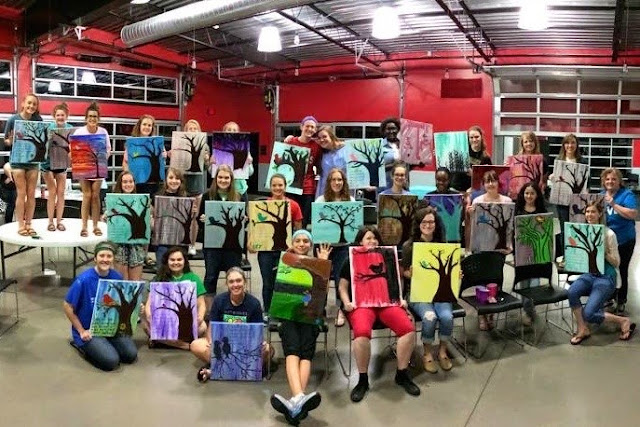 I did one of these painting classes before and wasn't as happy with the result. This time I have actually hung up my painting! :) I love how different everyone's paintings look! I really enjoyed walking around and seeing how each girl made it their own.

Since this was the last youth event that some of our girls will attend (because they'll be gone this summer), we prayed over the seniors. We also prayed for the children in Romania who would be receiving cards that we made that night... 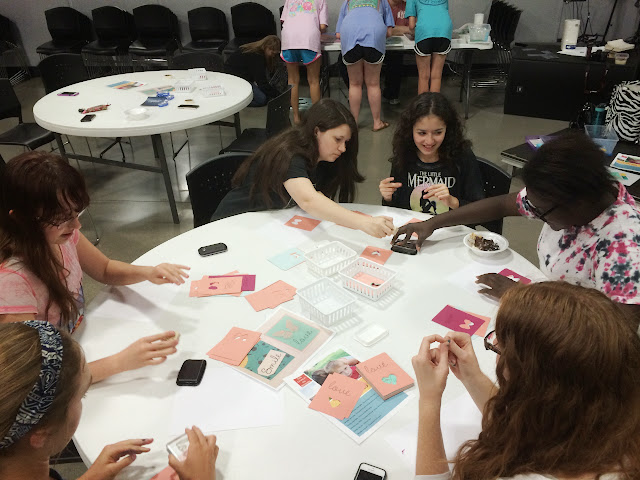 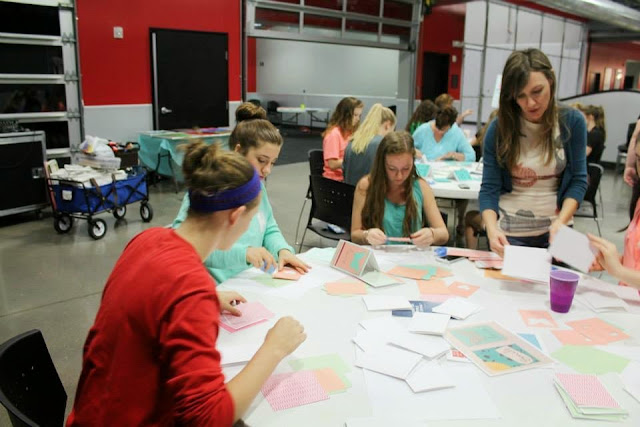 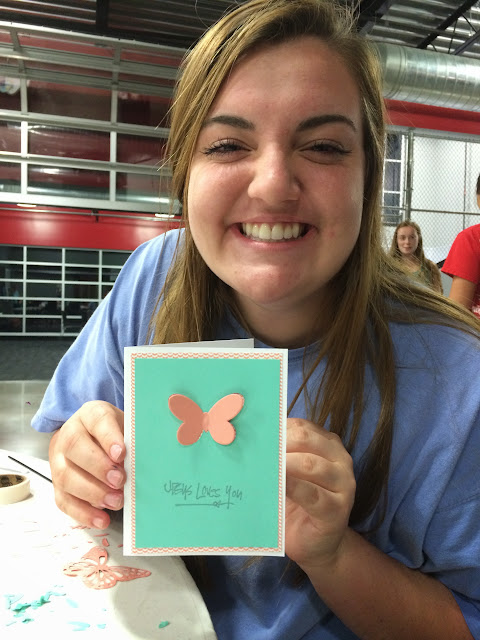 And we goofed off a little bit while we were putting the chairs back in order... 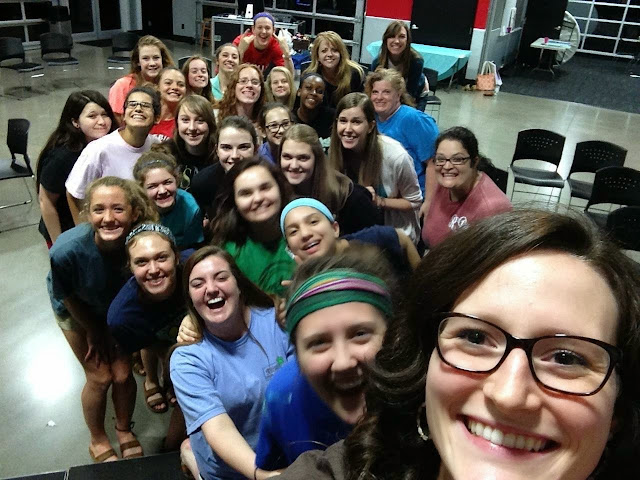 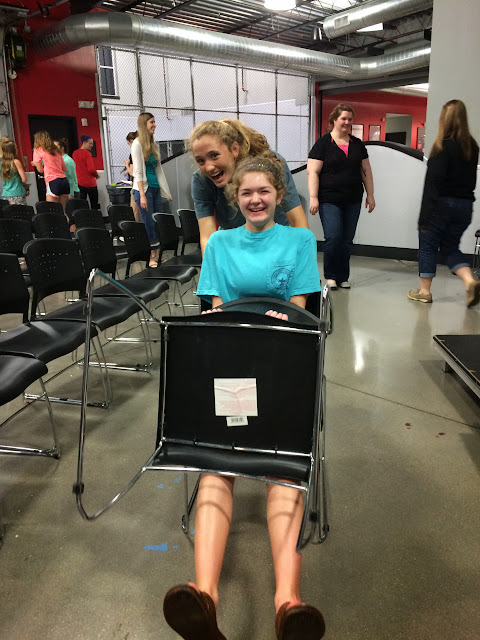 The next day we went to Adam & Susan's for a crawfish boil! Some of our old neighbors were there, so it was neat to see them and catch up on their families. There were also quite a few people from church, though I only managed to get a picture with lovely Deidre... 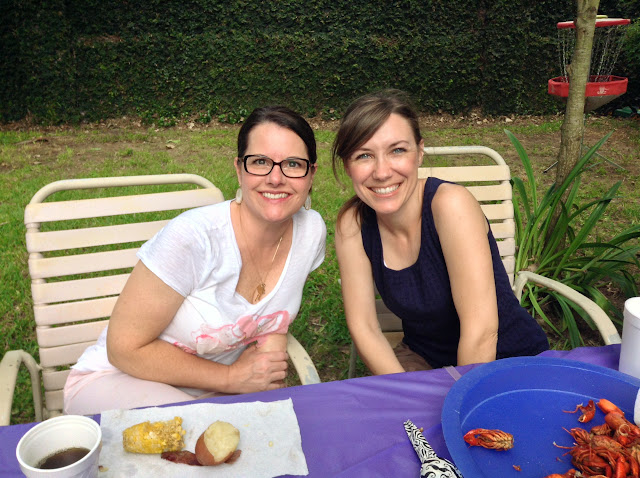 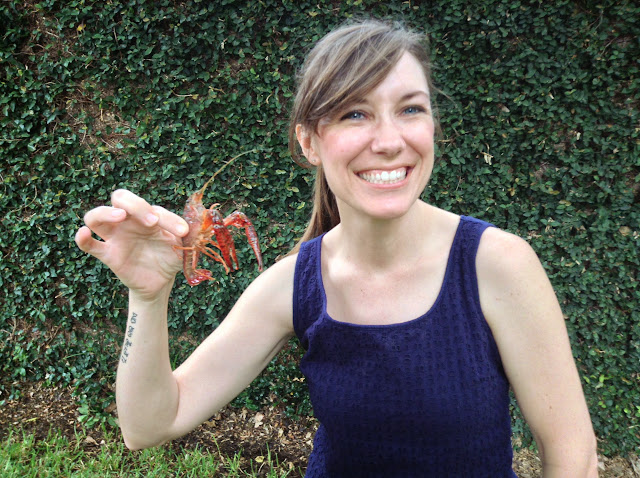 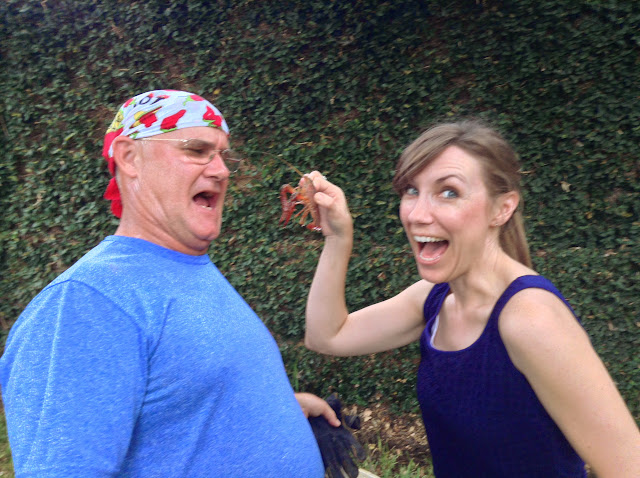 {ftr, it's a tank top that you see beneath my shirt. I wear tank tops under almost everything...}

We went from there to celebrate Clyde's graduation from seminary!! 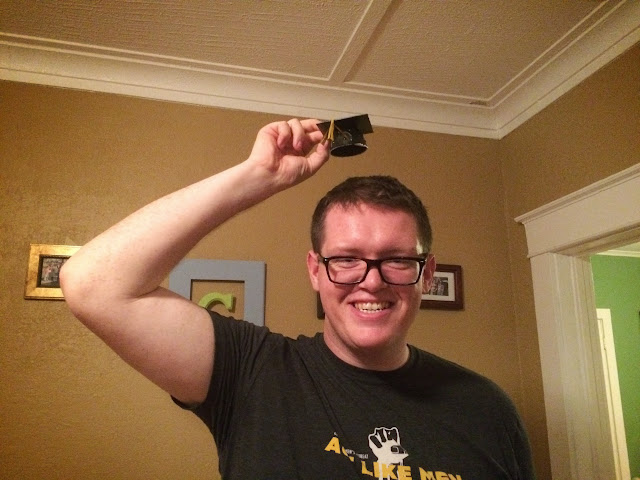 He completed 90-something hours to earn his Master of Divinity, which I think is pretty impressive! {In case you wondered, though he is quite tall, he is not a giant. That's the cap from the cake. His real cap was much bigger!}

The next day was Mothers' Day! My family made lunch for me and bought me gifts from World Market! ü Then we went to my mom's with my brother and his kids. Unfortunately, I failed to get any pictures there. We took plenty at home, though... 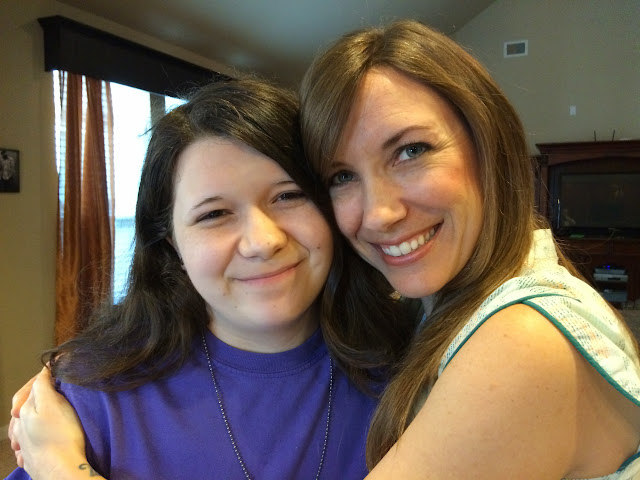 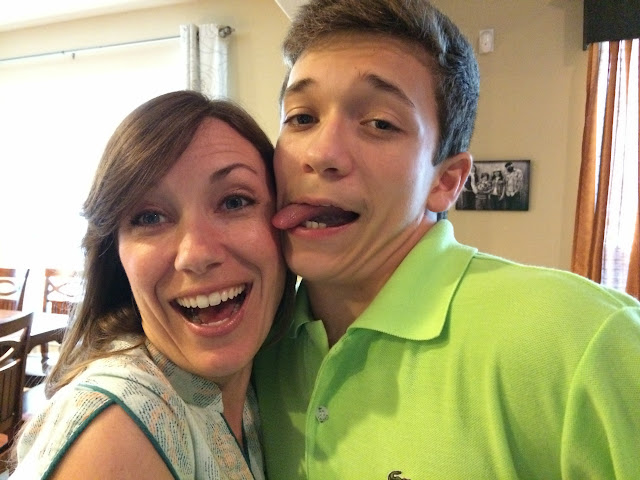 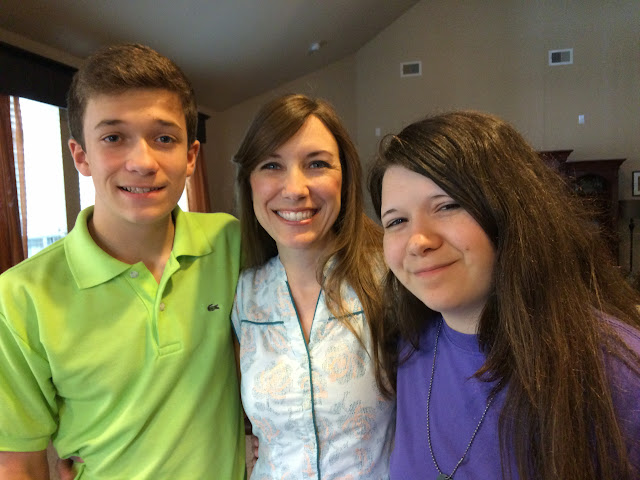 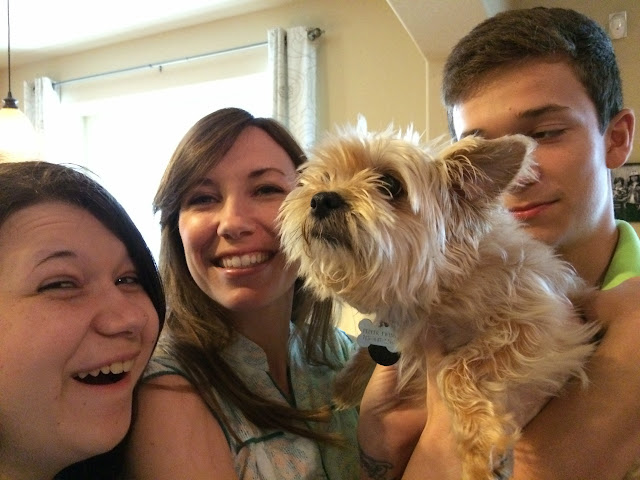 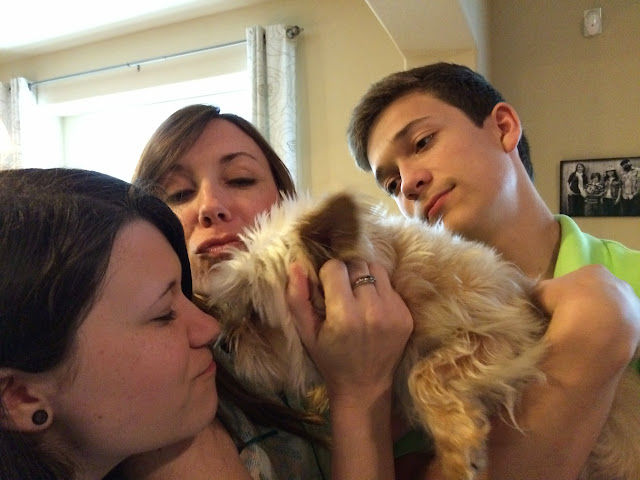 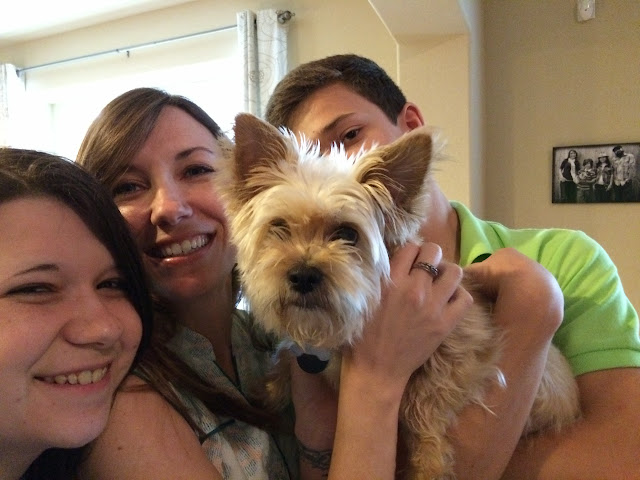 Baby girl and I had a little free time one day. What better way to spend it than enjoying dessert together?! 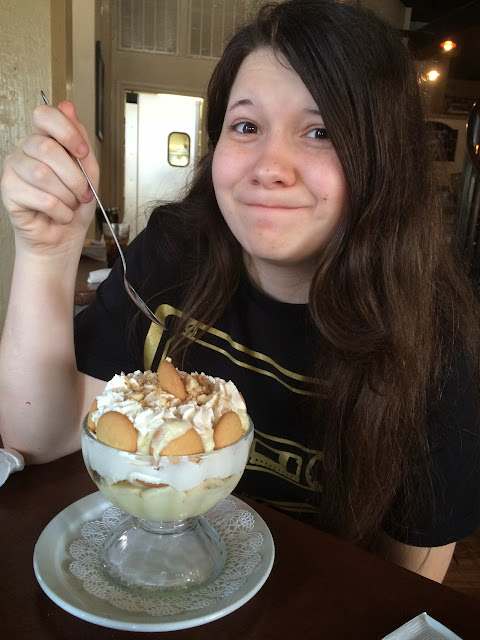 And in case you were hoping for a bit of randomness...this just happened one night, and I asked Elly to take a picture because I knew Kristin would love it (& she's out of state for the entire summer, so I knew the picture would make her happy): 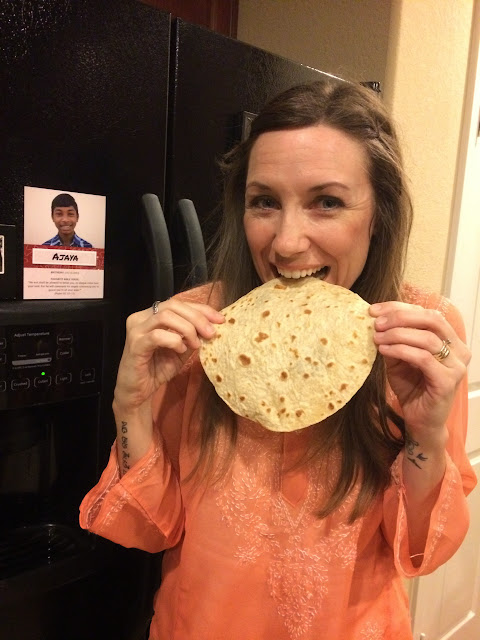 I realized I was wearing an Indian tunic, with my India hair {which is what happens when the weather's crazy...my hair it ends up "au naturale" & the bangs have to be pinned back 'cuz they're cray cray...which is how I wear it in India!}, eating Indian food {chapati!!}, standing by my Indian boy, and *bonus* you can see my Indian tattoo! I was originally standing a couple of feet away and decided to move closer to the fridge so Ajaya could be in the picture! That's the only thing that was staged -- everything else was coincidental! ü

As for today's song, it's an oldie but a goodie from back in the day when Ellie was still a neighbor! :)

I hope y'all are having a great week! I'll try to post again soon... ♥

Zion said…
When Ellie was still a neighbor! Aww, that's so cute. I did not notice your tank top, which is funny because in the pic of the girls working on the cards I noticed the three girls in the background. It's funny how friends and peers end up dressing so much alike! Also, total side note. I never want you to feel like you have to keep up with my blog! I plan on pick up the pace soon here and I know you are busy. I only mentioned you in my going away post because I honestly believe there were times I might have quit if it weren't for your comments. It gets discouraging when you go months with no feedback. So a big thank you, but also, no pressure!
May 21, 2015 at 12:02 PM

Brooke said…
i'll take reading a blog of yours whenever and however i can :) and if its with a side of Oreo cheesecake then definitely count me in!!
May 22, 2015 at 2:27 PM