Today's song has nothing to do with my life. I just thought I'd clarify before we get going...

I'm sorry I didn't post over the weekend. I had planned on posting last night but ended up helping Elly put Oliver's license plates on, and it took longer than I had anticipated. It involved drilling holes and stuff, and we felt powerful when we were finished! ;)

I had a pretty good week! In addition to the things I have pictured below...

Laurien came over for dinner earlier in the week. She also came over for pizza & movie night (as she does a couple of times a month). The boys went to basketball practice, so we girls watched Princess Diaries! ü We plan on watching the second one next time!

Cody spent the night at Ike's on Saturday, and Chris took Elly & her friend Seth to Winter Jam, so I had a free evening. Because I really know how to live it up, I did laundry and watched a couple of chick flicks!

My mom had a birthday last week, so we went to visit her yesterday afternoon. I guess I haven't mentioned that she has been on hospice for about a month, though it is not end-of-life hospice. It is more "comfort" hospice that is similar to palliative care (because she isn't terminal), but it is taking place at home by a hospice nurse. She is on new pain medicine, and they have her looking and feeling better than she has in quite awhile! They will also provide a five-day caregiver break for my step-dad, where they will care for her in a nursing home while he has the opportunity to get away for a few days. This is something he needs greatly, as he has been her sole caregiver for over 20 years now and hasn't had much of a break since her health has declined over the past few years.

Anyways, on to the pictures...

Wade brought me pie after lunch one day, but I didn't have a chance to eat it before staff meeting. I may or may not have been a bit distracted while I awaited going back to my desk to eat it! :) 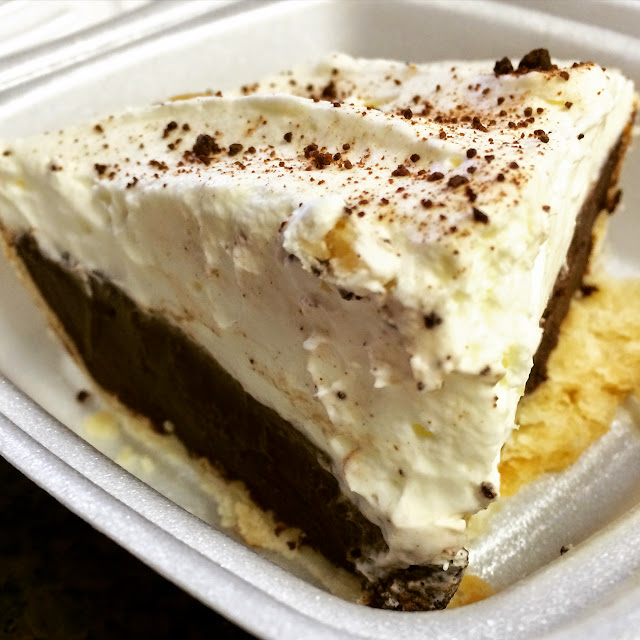 My kitchen facet handle broke off the other day (because I'm so strong)... 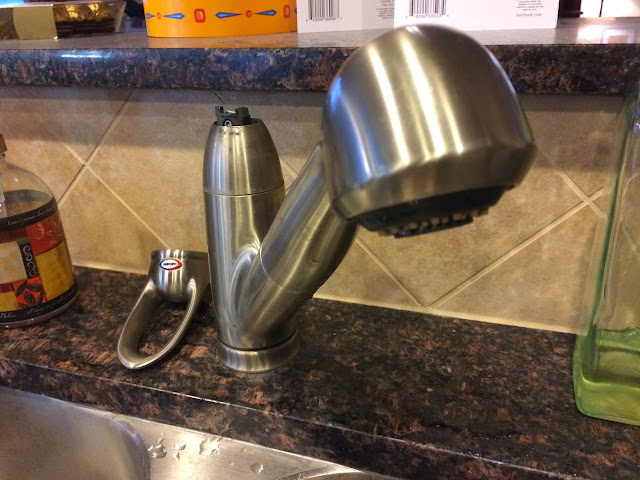 But Moen's customer service is super, and we should be up and going again soon!

We experienced another super cold track meet on Thursday night! The coaches mixed things up a little as they're trying to figure out how to score the most points at District. Cody didn't get to run the mile this week (though he won it last week...I'm confused). He ran the 2400 and came in third to two of his teammates. His time was super (8:25), but he had never run it and didn't know how to pace for it. He's sorta glad he came in third, because he doesn't want to run it again! He is really set on his goal for the mile. He ran the 800 again, but he came in third this time (probably because he had run a mile and a half only 40 minutes prior)! He also ran the 4x4, and his team won! He ran his leg in 60 seconds. The 8th grade boys ended up winning the meet, which doesn't happen very often because those boys from Alex & Ike's school are really good! 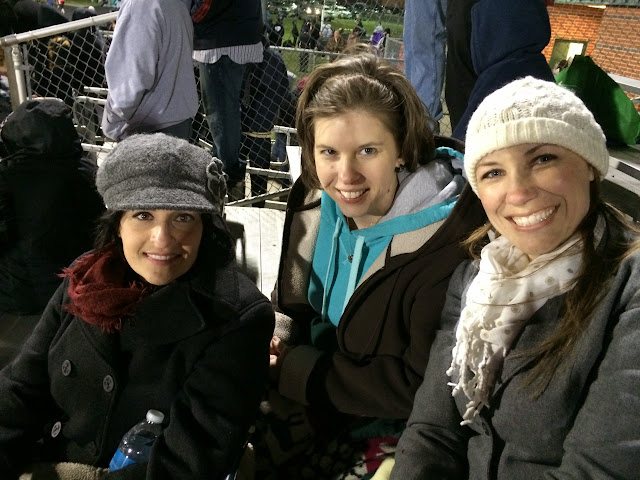 Cody ran the very first event, the very last event, and another race in the middle somewhere, so we stayed for the whole thing. This was me by the end, wrapped up in a few blankets and unable to feel my nose or my toes... 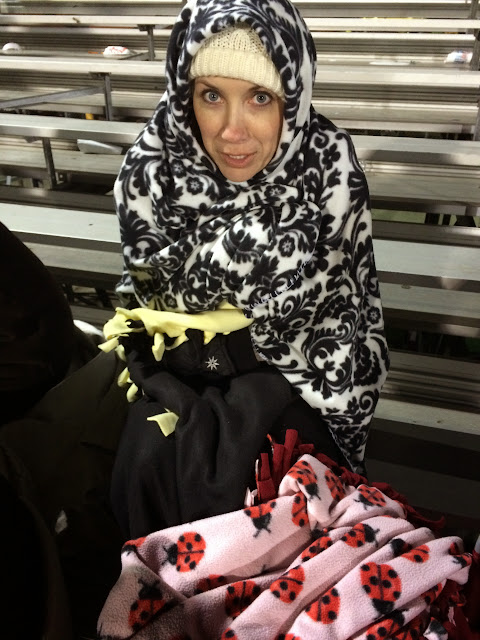 At every meet so far, there has been a man who was not too proud to cover up in a girly blanket. This time it was Christopher! 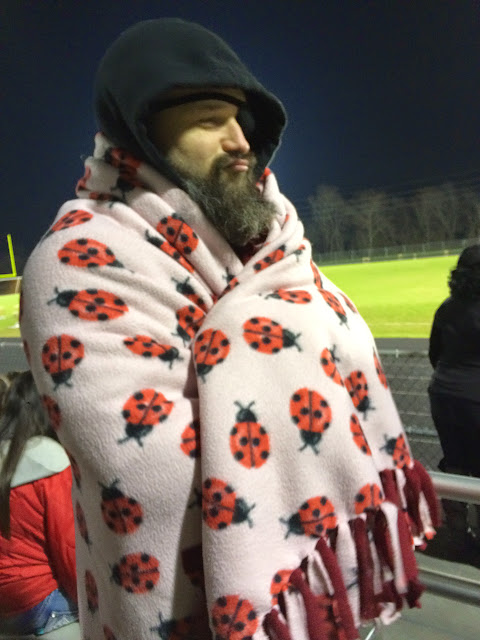 I met up with my "little sis" from my high school days on Friday! It's always good to catch up with her! 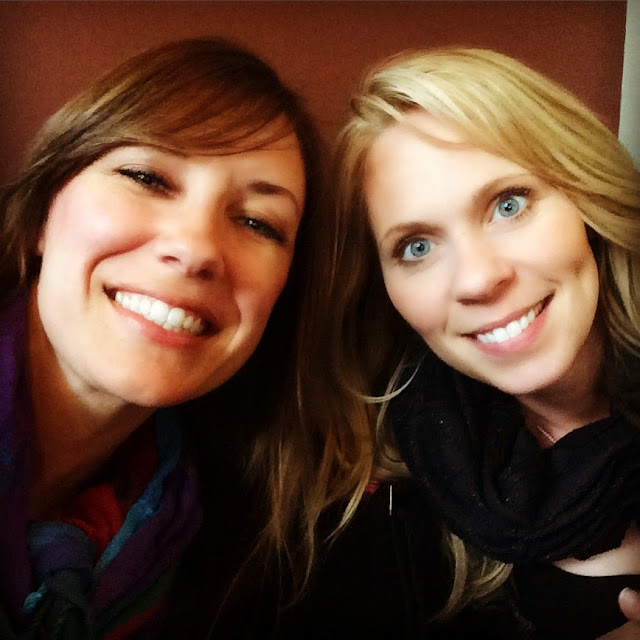 This huge cat followed Elly home from the mailbox, and I had to take a picture. He is SO soft and fluffy! 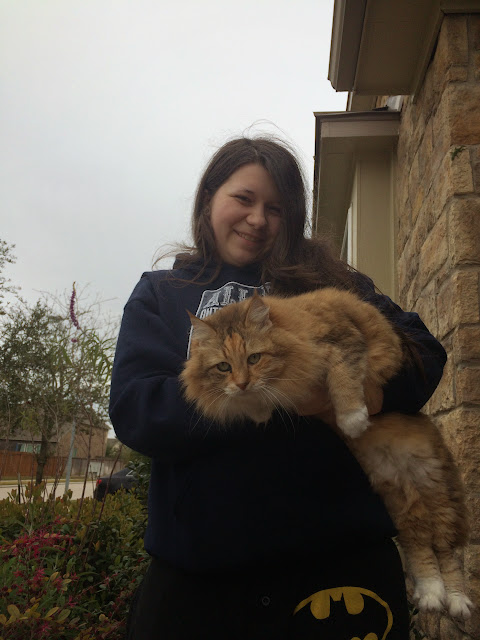 I finally got to meet Kim's puppy! She got him while we were in India, and Kristin didn't know about him until she got home! How adorable is he?! Definitely one happy way to not think about the sadness of leaving India! ü 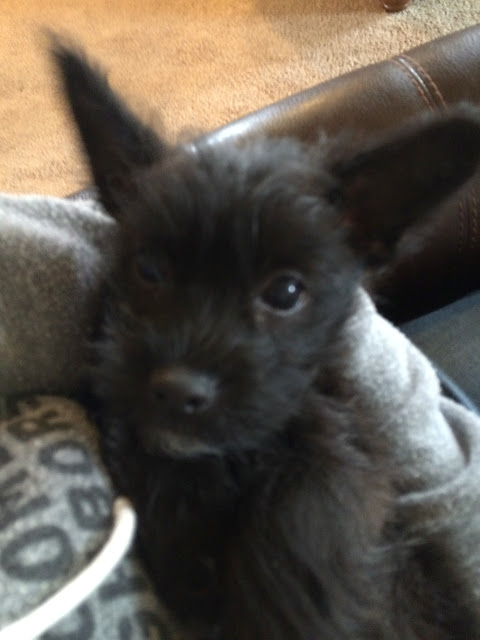 Speaking of India, I got a free photo book from World Market and Shutterfly! I chose last year's India trip for this special album, and I received it this week! Once I get everyone's pictures from this year's trip, I'll start on another album like this (& also blog about it)! 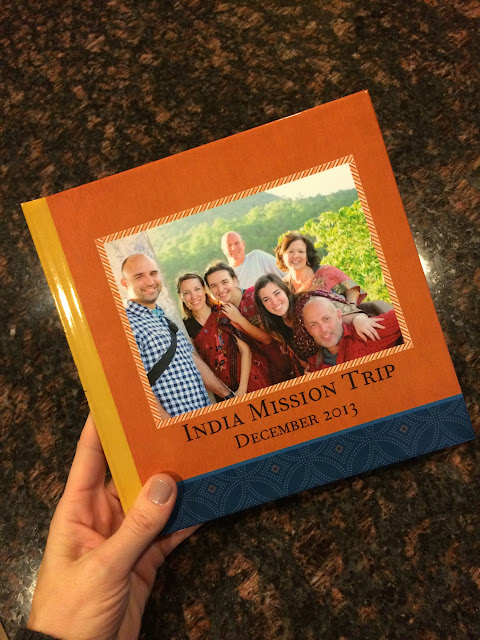 Alrighty, I better get busy or I'll be late for work! I hope y'all have a super great week!! ♥

RR Mama said…
You have been busy! I feel your pain with the cold outdoor sports. Ah what we do for our kids. R1 has a baseball tournament this week and one of the days the high is 37. 37! I do believe I will be breaking out the portable propane heater. BURRRR.
March 3, 2015 at 12:30 PM

Zion said…
That picture of Chris is SO FUNNY!!! Also, cool India book and such pretty cat. My parents have a huge long haired cat like that.
March 4, 2015 at 4:09 PM