"Great Are You Lord"

I began this post on a turbulent flight from El Paso to Los Angeles last Friday in hopes of actually posting something over the weekend. I knew that if I didn't start it would never happen...yet it still didn’t happen! We were in LA for the CURE OM conference. Y'all may recall the one we attended last year in Houston. While that one was certainly more convenient, it was nice to revisit LA. I had anticipated crossing something off my list (see #4), but I didn’t really get to visit LA. The conference was in the same hotel where we stayed, and we only ventured about 8 blocks away for The Coffee Bean. So I don’t think it really counts. I’ll tell y’all more about the conference later, but for now I have two weeks to fill you in on...

Baby girl got her official permit in the mail! 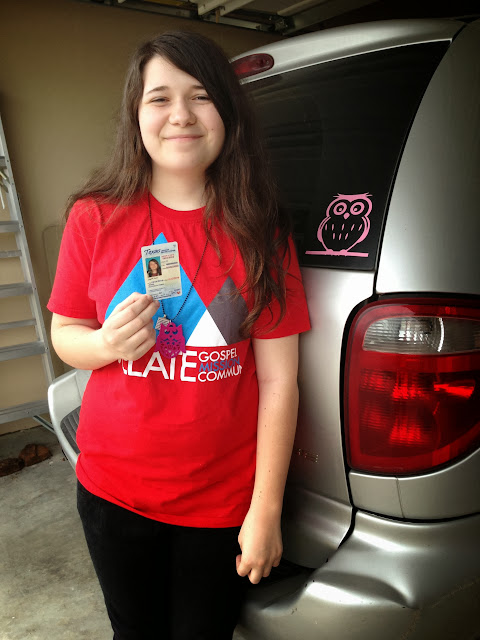 Our new neighbors were outside when we took the above picture, and Lauren offered to take one of the two of us together :) 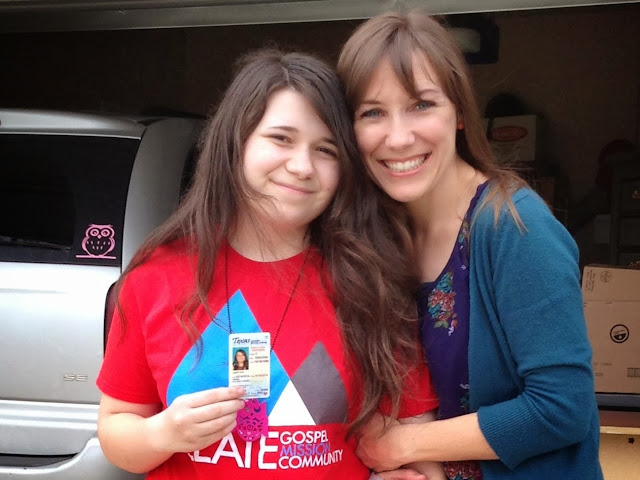 Y'all may have seen the picture I posted of my sweet boy's giant shoes: 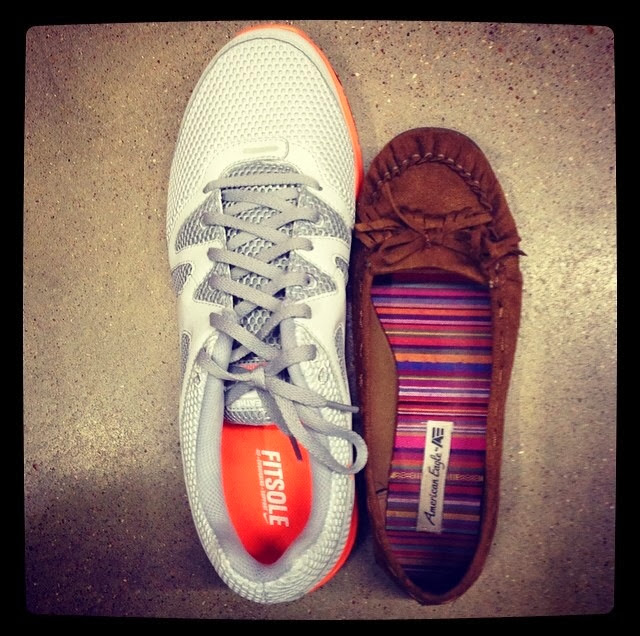 My feet are actually quite large (size 9) for my height (5'3"), so that picture doesn't even show a good perspective for what would be considered normal. My baby boy is now in a size 12!!

Anyways, Cody had outgrown the running shoes that he had been using and needed new ones before his first track meet last Thursday night! I ran into Debi on my way into the meet, so we ended up sitting together. {She's my friend & track carpool buddy, who I also used to pray with on Mondays before I started working more. She’s a cute little friend with a bit of sass that I’ll tell you about later...!} We found Wade and sat down with him in time to see Alex run the 2400. Amy had a prior obligation and was so disappointed to not be there, so I texted her a play-by-play! :) 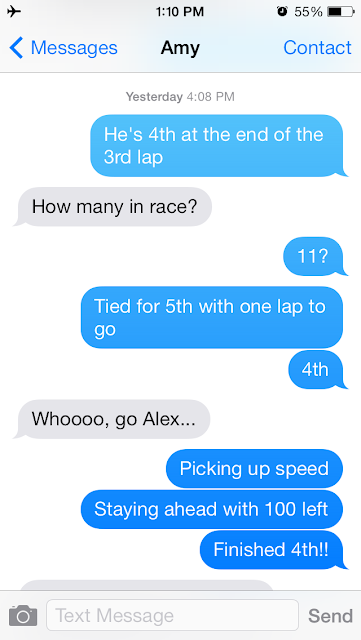 I discovered the boys together a little later and thought it was a good photo op! 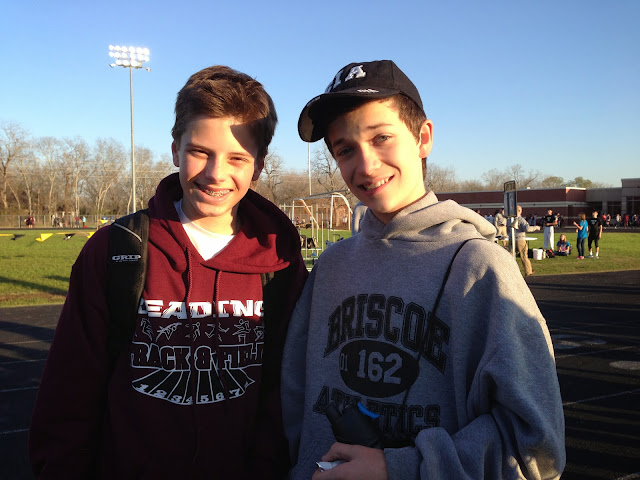 I love that they're doing sports together even though they're at different schools! :)

Cody came in 3rd in both of his races (the 800 and 1600), though he almost pulled ahead of the 2nd place guy at the end of the mile. He probably finished half a second behind him, if that. His time for the 800 was a PR, and he was one second off his PR for the mile. I was proud of him for keeping a steady pace and pushing hard at the end. He was sore the next morning!

We had made friends with a man behind us whose son Daniel was in the same races as Cody. When we discovered that he was in a different grade (therefore not competing against Cody), Debi said, "So your son has a chance." {Ha ha! I told you she was a little sassy!} It turned out that his son was amazing! He started out in the lead but fell back to 4th at one point. He was staying on pace with a couple of our guys who I knew from cross country, so I knew that he was pacing with good runners. We were rooting for him, just as his dad had rooted for Cody. In the last 200, he moved into 2nd place and was able to take the lead at the very end! We were all cheering him on and were so excited when he won. It was his first track meet ever, and his parents were so proud. I actually had tears in my eyes. It was beautiful! He came to see his parents in the stands a little while later, and our little group clapped! He looked at us all confused because we were strangers. It was funny! :)

It was so cold that by the midpoint of the night, we already couldn't feel our toes! It was awful!! Her husband Mark had been in line to buy us some hot cocoa, but Tate's race was about to start just as Mark got to the front of the line! When he went back afterward, they had run out! He had a jacket in his truck that he brought for us to share, though! :) 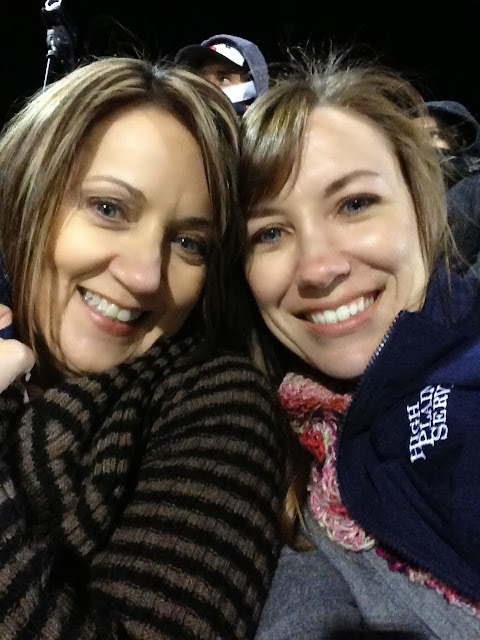 {P.S. That's Daniel's dad behind us! Ha! I didn't know he had ended up in our picture until now!}

Cody had another meet this Thursday night, and he did even better than the week before! He finished 2nd and set new PRs in both races. Plus he nearly caught up to #1 in the mile and finished less than a second behind him. It was a teammate of his who paces pretty well and usually finishes very strong (sometimes passing several runners). This time, he held the lead most of the time. For Cody to nearly catch up to him is great! :) I've been talking to my amazing cousin Kirby about his times, which are Cody's goals! {He's aiming high!!} He only needs to shave 37 seconds off his 800 and 1:27 off his mile! ;) To be on track with Kirby, though, he needs to shave off around 10 and 22 seconds, respectively, by next year's track season. I think those are reasonable goals, though I'm proud of him regardless of what he achieves. {& in case you're wondering, Daniel won his 800 and finished 2nd in the mile!}

So I took up arm knitting this week! :) I made an infinity scarf for myself so I could learn the technique: 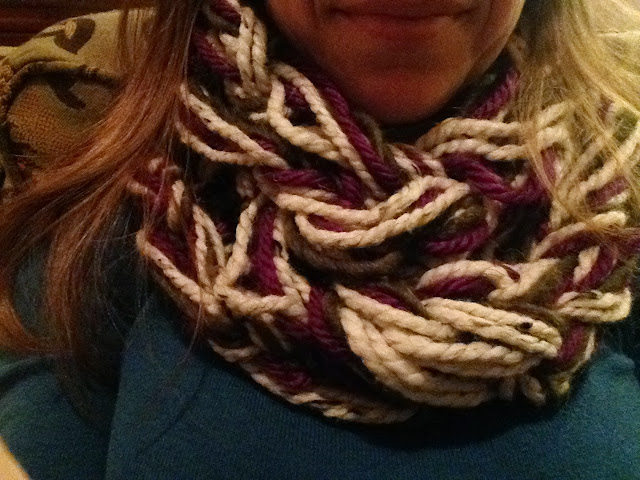 Then I managed to make one for Kristin (who stayed with my kids while we were in LA), & it only took around 30 minutes! :)

Did y'all see my super cute hiking backpack?! 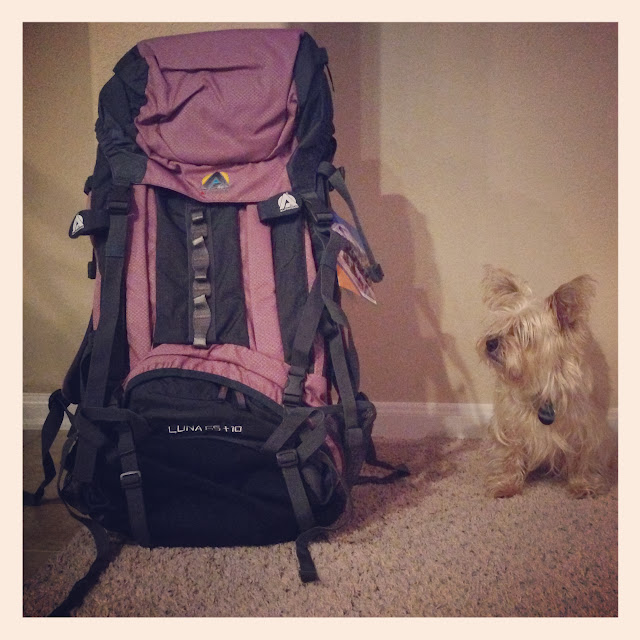 I borrowed one for my trip to India, and I could probably borrow one every time I go again. But I got a great deal on this one. Plus it's pink!

I worked on my India trip post while I was on one of the flights, so I hope to condense it for y'all sometime soon. And I want to tell y'all about LA as well. I also hope to catch up on your blog posts in the near future. I really do care about each of my bloggy friends & want to know what's going on in your lives. I am just a bit overwhelmed right now. I go from work to the chiropractor &/or track &/or church most days, and I barely have time to make meals for my family. I'm not trying to complain. I'm just still adjusting to all of this, and it's easier said than done!

Alrighty...I suppose that's all for now. I hope y'all have a wonderful weekend {despite losing an hour of sleep!} & a super great week ahead! ♥

Laura said…
I'm sorry you're feeling overwhelmed! I know the feeling - I've fallen off the blogging wagon and am trying to get back on. I'm glad you're back and I can't wait to read about India!
March 13, 2014 at 10:42 AM

Brooke said…
your kiddos aren't kiddos any more!
congrats to E on the permit!
dude has some big feet! i would have guest from that pic you were a crazy small 6 or something.
LOVE the backpack
LOVE the scarf
and better late than never on the India post!!!
March 14, 2014 at 1:31 PM