During devotional time at staff meeting this week, we got a little peek at what Neil will be preaching on this Sunday. We're currently going through the book of Romans & will be looking at a bit of Abraham's history, specifically where he believed what God had promised. Neil asked us what God has told us that we have a hard time believing. Wade answered first. Then after a somewhat awkward silence, Neil asked me why my eyebrows were raised...

I know what I struggle with & thought that the timing of his question was interesting since I had just mentioned this briefly on Saturday (the part at the end about identifying with the line about the cage). I was thinking about that when I realized that I was wearing the necklace that Marcie gave me. And apparently my eyebrows gave away the fact that I had an answer to his question. 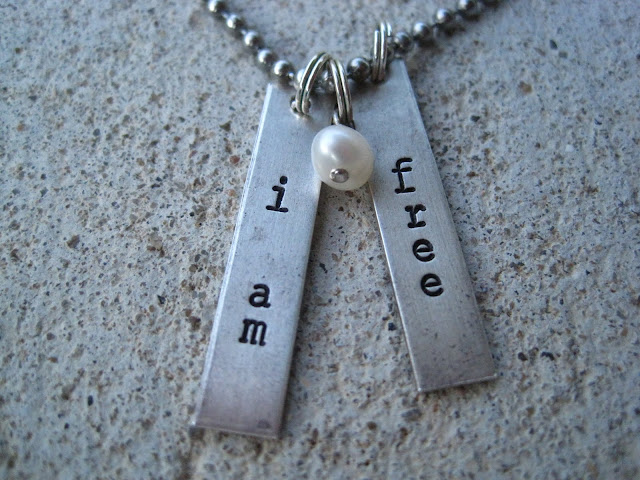 For the record, this doesn't plague me in the sense that I mope around feeling chained or anything. Most of the time, I know and believe that I am free. But there are times when I doubt my freedom. There are times when I still battle those ugly lies from the enemy. And there's a part of me that's a little bit afraid of how I'll continue to handle things [mentally] now that I'm exercising again. I'm OK right now, but I know how my mind works. And the enemy knows how my mind works, too. And he also knows that if Jesus made me free, I am free indeed (my paraphrase of John 8:36). But he doesn't want me to know and believe that.

One thing that's great about God, though, is that He knows all of this, too. And He is more powerful than our enemy. He loves me and continues to remind me that I am free, and that I should believe what He says. In addition to the things I mentioned earlier, there have been at least a couple of other things...After staff meeting, I had to look over a document to prepare for a missions training that's coming up. The first words I saw on the page were, "You are free." ü And God repeated the whole mindset [of believing what He has promised] through a study I just started this week. Our reading this morning was most likely some of the same scripture that Neil will be preaching from on Sunday, yet this study is completely separate from my church; therefore, it was not intentionally placed before me by church staff in order for our church body to be thinking on these verses or anything like that (if that makes sense). Anyways, what I read today contained these words, "In hope against hope he believed...according to that which had been spoken..." (Romans 4:18)

So today I am thankful that God has spoken this to me so many times this week. I don't know if He is strengthening me for a battle later, or if He just wants to remind me now so I won't battle it later. Either way, I'm thankful! What about you? Is there something God has spoken to you that you have a hard time believing? I would be honored to pray with you about it. You can either leave me a comment below, or click "Email me" (under the header/to the right of the song) if it's more private than you care to share in the comments. May it be said of us what was said about Anna in Luke 1:45, "And blessed is she who believed that there would be a fulfillment of what had been spoken to her by the Lord.” ♥

Zion said…
I am so glad to hear you open up like this. I have been on the brink of a very honest and a little bit of a heavy blog post that would expose more than I might want to about how I have been feeling lately. I will go ahead and leave it in a comment since I am here already , but for me the thing I have struggled with big time is depression. As I am going through all of these changes and transitions I have a hard time remembering His promises and choosing to stand on them. I would love a prayer for strength in this season.
February 1, 2013 at 3:18 PM