“Oh,what I would do to have
the kind of faith it takes
To climb out of this boat I'm in
Onto the crashing waves
To step out of my comfort zone
Into the realm of the unknown
Where Jesus is,
And he's holding out his hand

But the waves are calling out my name
and they laugh at me
Reminding me of all the times
I've tried before and failed
The waves they keep on telling me
time and time again
"Boy, you'll never win,
you'll never win."

Oh, what I would do
to have the kind of strength it takes
To stand before a giant
with just a sling and a stone
Surrounded by the sound
of a thousand warriors
shaking in their armor
Wishing they'd have had the strength to stand

But the giant's calling out
my name and he laughs at me
Reminding me of all the times
I've tried before and failed
The giant keeps on telling me
time and time again
"Boy you'll never win,
you'll never win."

Wow! 2004: What a year! Both of our kids gave their hearts and lives to Jesus & asked Him to forgive them of their sins. First, Elizabeth made the decision at VBS in June. Then, after a month & ½ of Cody seeing her choices & hearing her say, “Now that I have Jesus in my heart, I [fill in the blank with any good choice a 5-year-old may make] instead of [insert a bad choice here!]”, Cody said, “I want what Sister has!” & made the decision, too!

God also changed our plans a little bit. We were very content in our life there in Midlothian, but for some reason still unknown to me, God called us away from that. In January, Modern Day John played one of their last Dallas shows at the LightHouse, and when Freddy & Dan found out that Chris played bass, they [jokingly, I thought] asked if he wanted to move to Houston & join their new band. If we were going to move anywhere, Houston would be the first place to consider, but we weren’t planning on moving. I sorta disregarded their interest, but Chris didn't. Throughout the months that followed, he would think of them & pray. At one point, he called Freddy to see how things were going, & he said he was still waiting to hear Chris. That July, when we were at Mom & G's for vacation, Chris drove out to Sugar Land to play with them. That's when I realized he was serious, so I began to pray.

Though Chris had played the bass for about 15 years, it was really just on Sundays & some Wednesdays. Not to criticize him or anything, but it didn’t seem like he was good enough to play with the talents of Freddy & Dan. Even though, I had this “knowing” inside of me that I couldn’t just blow off. I had to pray. And strangely, there was a sadness inside me that he wasn’t good enough, but it was a neat thing to be able to say that he jammed with Freddy & Dan from Modern Day John! Anyways, we went home & prayed. Chris practiced for a few weeks to see how much he could improve. And when it was all said & done, we had our answer. I could go into all the ways it was confirmed to us, but it would take at least as much room as I've already taken up today. So, if you care to hear all about it, I can list it out another time. But for now, I'll just say that between the Word of God itself (the Bible), words from our friends & even strangers (those who knew what we were praying about & those who didn't have a clue) & other “coincidental” circumstances (if you believe in coincidence, which I don't!), we knew 100% for sure that Chris was supposed to join the band.

It was a fairly quick & easy transition. A friend of ours from church bought our house, and everything fell into place. Chris looked for a job, but then decided to start a web design company (which allowed for the flexibility he needed in order to travel with the band). We moved into my dad's house while Chris got the business going. Without a steady job, it was hard to buy a new house; so we decided to stay there until the summer in order to keep Elizabeth from having to move twice during her Kindergarten year. Chris was able to work right out of our home. It was quite the leap of faith, though, and it really didn't make sense! One day during the transition process, my brother told me about today's song & said it made him think of us. I think so, too... 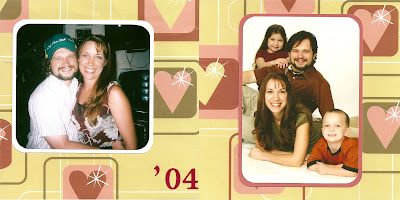