For a long time now, Cody has wanted the almost-as-big-as-he-is Star Wars Legacy Collection Millennium Falcon. It's not the incredibly expensive LEGO version, but it's still quite a substantial chunk of change. He had been saving his allowance since Summer & finally had enough money shortly before Christmas. Seeing as I had already been able to get a super fantastic deal on it for Christmas, I advised him to wait until after Christmas & his birthday just in case. I'm sure he knew he was getting it, especially since he only wrote three items on his Christmas list! But that still didn't keep him from looking on ebay every other day to see if he could find a good deal on it!

Since he got what he wanted for Christmas, my boy was left with a wad of cash that he was itching to spend! Plus, Elly had some Christmas money, too. So, we finally went to Toys"R"Us the other night. After spending way more time there than I cared to, he finally found what he wanted: an electric scooter! He loves that it's red, like his dad's! We had to charge it over night, and I must say that he was MORE than anxious to ride it when he got home from school the next day! I didn't even make him do his homework first, because I was sorta wanting to test it out, too! {I'm just under the weight limit ~ yay!} When Elly & I were describing how it felt to ride it, we both said that you push the little thing on the handle are are like, "Whoa!" & then we laughed, because that's the title of an Aly & AJ song!

So, there you go ~ I had to write a blog post about it! 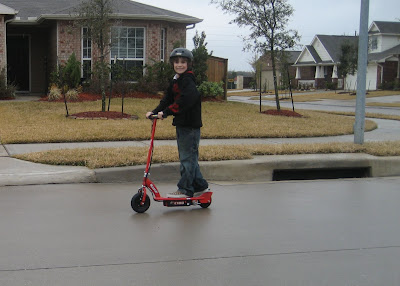 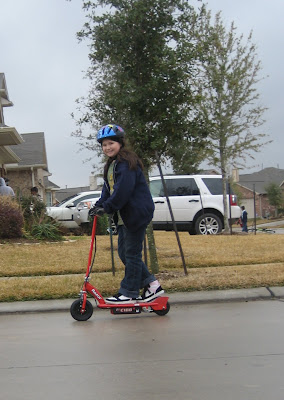 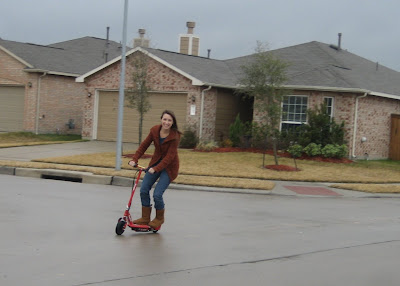